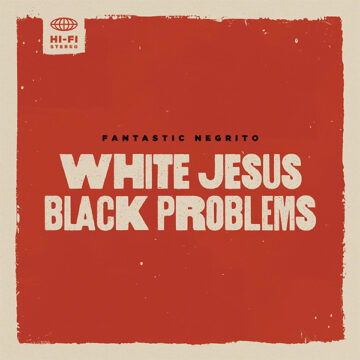 For his fourth full-length album, Oakland-based Fantastic Negrito has returned with White Jesus Black Problems. Following 2020’s  Have You Lost Your Mind Yet, the prolific songwriter has delivered a politically and culturally charged collection of 13 songs, along with an accompanying short film of the same name. The result is an ambitious project that marks Fantastic Negrito as an essential artist of our time.

Opening with “Venomous Dogma”, Fantastic Negrito has immediately set White Jesus Black Problems apart from his previous releases with a hazy, psychedelic alt-pop tone that pulls inspiration from gospel, traditional African American spirituals, and metal. Even by Fantastic Negrito’s standards, “Venomous Dogma” is unlike anything you’ve heard before. Similarly, the following track, “Highest Bidder” takes traditional melodies and throws them together with funky rhythms and tones, making for a simple and subtle song that ebbs and flows effortlessly. Fantastic Negrito’s use and fusion of a variety of traditional and modern styles is uncanny and entirely unique. In this regard, White Jesus Black Problems is a creative power force

Without a weak moment on the album, Fantastic Negrito has found his latest sonic evolution to his distinctive sound on White Jesus Black Problems. From the ‘60s pop of “Nibba Dip” to the haunting swagger of “Man With No Name”, White Jesus Black Problems is an incredible album. In addition to the opening tracks, the up-tempo funk of “In My Head”, and the electronic odyssey that is “Trudoo” stand as must-hear highlights across the record.

A blues musician at heart, Fantastic Negrito remains prolific as a songwriter that avoids categorization. White Jesus Black Problems is no different in this regard. The album feels like the perfect synthesis of the alternative rock and blues of The Last Days Of Oakland and Please Don’t Be Dead and the pop textures of Have You Lost Your Mind Yet; ultimately making his latest entry to his eclectic catalogue a brilliant step forward.

A passion for music has always been a part of Gerrod’s life. As a young boy, he was raised on a steady diet of the music from The Chili Peppers, Aerosmith, The Stones, Prince, and others from his mum. Raised in the GTA, Gerrod continued to foster his love for music by attending a wide range of concerts and learning the drums. His unapologetic passion for music has no bounds and has spread to a wide variety of styles, whether it be the 90’s rock that sound tracked his teenage years, the jazz he studied in university, or his newfound love for hip-hop. He recently received his bachelors in music and education from York University and is passionate about writing and reviewing good (and less than good) music. Gerrod is also the drummer and songwriter for a Toronto based rock & roll band, One In The Chamber.
RELATED ARTICLES
album reviewalbum reviewsfantastic negrito
9.0