SPILL ALBUM REVIEW: THE FALL – ARE YOU ARE MISSING WINNER (DELUXE REISSUE) 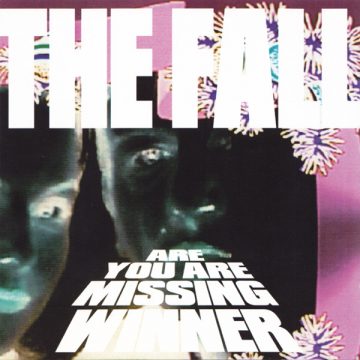 The Fall
Are You Are Missing Winner (Deluxe Reissue)
Cherry Red

Apologists attribute prerelease sales of Are You Are Missing Winner at gigs in 2001 for the fun fact that The Fall’s 22nd studio album was the only one after 1983 not to chart. Offering zero unreleased material, Cherry Red’s reissue of AYAMW will ensure this distinction remains intact. Along with the first vinyl pressing of the improved sound, 2006 deluxe version from Castle Music, Cherry Red has remastered three previously available shows from the AYAMW tour. Thus, the 2021 reissue is presumably aimed at vinyl collectors, fans looking for an audio miracle instead of new insight, and polite writers who didn’t take a swipe at The Fall’s autocratic frontman, Mark E. Smith (MES), when he died in 2018.

AYAMW will test one’s tolerance for unproduced, crudely recorded riff rock with even worse sound quality live. But hey—it’s The Fall! Without the suspension of disbelief opiating Fall devotees, it is difficult to distinguish AYAMW’s live tracks from a middling garage band bashing hackneyed grooves behind an inebriated crank who won’t surrender the mike. Never mind that most of the time, MES was under the influence of alcohol and/or amphetamines, wildly careening between itchy excitement on “Mr. Pharmacist” and mumbling from a lyric sheet on “Kick the Can.” Notably absent from the live tracks is “(There’s a) Ghost in My House,” the band’s highest charting single from 1987, and “Gotta See Jane,” another poker-faced R. Dean Taylor cover that appears on AYAMW.

“My Ex-Classmates’ Kids” lazily co-opts a riff so ubiquitous even your granny on bongos knows not to nick it and call it her own. MES ‘hums’ a surprisingly catchy, off-key melody that devolves into a lurching groan in concert. The inferior “Kids” was cloned from the nitroglycerine “I Wake Up in the City,” an era B-side with the same riff, better lyrics, and an outraged, Dylanesque vocal cadence. Live, the two songs are mashed together in a same-chord stomp that never approaches the astonishing fervor of the “City” studio take.

Beating Depeche Mode to the punch, The Fall cover Lead Belly’s “Bourgeois Blues” the way only white Englishmen rocking a protest song written by a black man born on a plantation could. Whereas the syrupy studio mix prevents any traction, played live it is alternately a confident cracker buoyed by a menacing drum line or an interminable slog with no swagger. In the latter case, MES’s limp vocal delivery is neither respectful nor respectable.

Sublimating 10,000 years into a descent through the heart of darkness, “Crop-Dust” could have been recorded with William S. Burroughs in a ziggurat. Its narrative hallucinates the brain’s decay from chemicals with Manchester’s blight from development into an apocalyptic “GAAAAR-den.” MES garbles from a Jesus Lizard bass sludge tarpit beneath, unplugging amps and other life-saving devices. Hip priest momentarily blinks out before eulogizing, “Holy, holy, holy, holy, holy!” As on earth, gaining entrance to The Fall was an easy proposition, but MES reminds us the only person who managed to stay for the whole party is dead.

SPILL ALBUM REVIEW: THE FALL – ARE YOU ARE MISSING WINNER (DELUXE REISSUE)

Charles T. Stokes is a nonprofit resource development coordinator and donor researcher based in Denver, USA. He’s also a tennis player and writer looking to make a racket with his own noises. “There are places in the world where one cannot publicly listen to or perform whatever music they choose without fear of harassment or prosecution. The freedom to write about new music is power, a privilege.”
RELATED ARTICLES
album reviewalbum reviewsthe fall
8.0