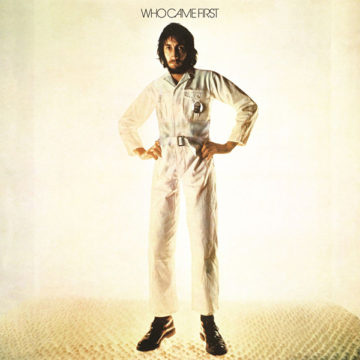 Pete Townshend’s Who Came First was first issued in 1972 and followed The Who’s biggest success to that point, Who’s Next. Who Came First, which is considered to be Townshend’s first solo album, is actually his third. He had previously released two privately pressed albums as tributes to Meher Baba. Who Came First features some songs found on those two solo outings. The album also included demos, including songs for the abandoned Lifehouse project. It is an important album in The Who’s history and certainly in Townshend’s solo catalogue.

Townshend has now assembled a new version of Who Came First – 45th Anniversary Expanded Edition. It is a double disc set. Disc one is a remastered version of the album, and it sounds fantastic. Often the remastered versions lose something in the remastering, but here the album sounds sharper and cleaner. Perhaps it is due to the fact that Townshend worked with his long time collaborator Jon Astley and they went back to the original master tapes.

The album kicks off with the classic “Pure And Easy”, which was a demo from Lifehouse. It was hoped that Townshend would have included the original eight minute version. Alas he has not, but there is plenty of new material for fans to enjoy. There are eight previously unreleased songs, along with edits, live and alternative versions. One beautiful addition is the live verison of “Evolution” from  2014’s Ronnie Lane Memorial Concert. It is a great song Lane wrote and sings on Who Came First, and Townshend sounds very emotional. A great live performance.

Who fans will enjoy the instrumental demo of “Baba O’Reilly”, which demonstrates how this song was created. Other songs show Townshend in a different light, like the beautiful and moving instrumental  “Meher Baba In Italy”.

This album has been reissued before, but this is the definitive version. The edits, remixes and alternative versions do make this an essential album for Townshend and Who fans. It is very clear that a great deal of effort and time went into Who Came First – 45th Anniversary Expanded Edition, and Townshend and company has got it right. This is an almost flawless reissue and a great glimpse behind the curtain to see how the classic songs have come together.

Born and raised in Whitby, Aaron discovered music through his love of The Beatles. This led to a career in radio, writing for various publications, and ultimately a radio show about The Beatles (Beatles Universe), which ran for over four years. When not immersed in music, Aaron enjoys spending time with the loves of his life -- his wife Andrea, and daughters Emily and Linda (all of whom have an intense love of music too).
RELATED ARTICLES
album reviewsthe whoume
8.0