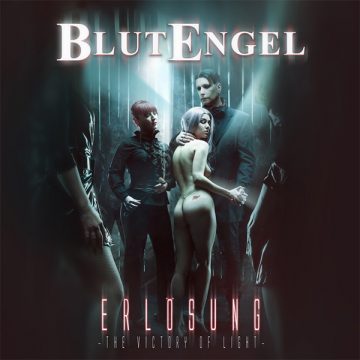 Blutengel
Erlösung: The Victory of Light
Out Of Line Music

German Gothic duo Blutengel, comprised of vocalists Chris Pohl and Ulrike Goldmann, have had quite a busy year thus far. Not only did they release a collection of ‘80s covers this year but now they have also launched their latest studio album, Erlösung – The Victory Of Light.

This 14-track collection is filled with exactly what fans have come to expect from the vampiric duo, namely hypnotic English and German lyrics that speak of trusting one’s self over the trappings of traditional religion, sexy club tracks, and mournful ballads.

Standouts from this new album have to include “Deine Dämonen” which translates to “Your Demons”, a deeply emotive yet pained ballad showcasing Pohl’s rich voice. Equally, another beautifully thematic ballad is “Hand In Hand”. Simply put, it’s just stunning. The title track “The Victory of Light”, and the album’s first single, features both German and English lyrics and is already a hit with club DJs.

Goldmann takes lead on the track “Wie Sand”, a catchy and danceable track that perfectly showcases Goldmann’s vocal prowess. “Darkness Awaits Us” is a well-honed duet for both Pohl and Goldmann, as usually Blutengel songs tend to focus on one vocalist. The haunting and digitally-driven music video for the track is a great companion.

Erlösung – The Victory Of Light, is a must have for Blutengel fans or anyone fond of dark electronic dance tracks. In physical form, this release is a double disc for nearly two hours of listening joy.

Samantha is both a writer and a fan of the arts and has been able to find numerous ways to pair the two. Eager to dive head first into writing for Spill, Samantha is an avid partaker and reviewer of live art in Toronto serving as an editor at Mooney on Theatre exploring live local theatre, she's a photojournalist for Go Globehopper, a travel, dining and tourism blog that focuses on Toronto and abroad and previously for Lithium Magazine. She's passionate about music, theatre, photography, and writing -- not necessarily in that order. She drinks tea more than coffee, prefers ciders over beers, and sings karaoke way too loudly. You can follow her on various social media including Facebook, Twitter, and Instagram.
RELATED ARTICLES
album reviewalbum reviewsblutengel
8.0