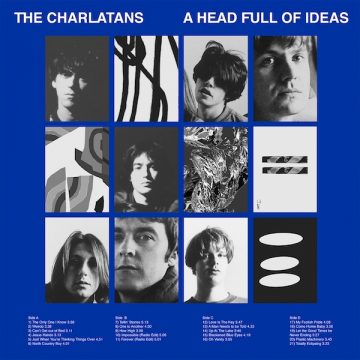 To mark 30 years of making records since their inception in England’s West Midlands, The Charlatans have released A Head Full of Ideas. Their third singles compilation capitalizes upon a surge of goodwill towards the band following vocalist Tim Burgess’s popular Twitter album listening parties when the pandemic began. The set tracks the evolution of the classic Charlatans sound of Hammond organ, house-influenced rhythms, and Northern Soul-inspired melodies.

What sets Ideas apart from The Charlatans’ previous retrospectives are multiple package options containing up to four CDs’ worth of music drawn from singles and mainly unreleased B-sides, demos, remixes, and live tracks. Despite updating only six recent singles to the tracklist of Forever: The Singles from 2006, this best-of set is wisely limited to just one CD.

The CD of unreleased, unleaked demos play like a documentary film of an earthier, more underground Charlatans from an alternate universe. Lost since 2001, Burgess discovered a little electro song with a shuffling beat and a harmonium/sitar-like drone called “C’mon, C’mon” in his mother’s CD collection. “It’s such a joy,” he sings, and it certainly is to hear The Charlatans sound so untethered. Hushed and intimate, “Sleepy Little Sunshine Boy” is superior to its 1999 B-side incarnation and would have been a great single—in 1974. This quieter mix reveals a tiny crack in Burgess’s voice and gives a Wurlitzer organ and a Les Paul Custom guitar space to breathe. Buried vocals sweetly harmonize over violent organ stabs and Zeppelin guitars for the experimental, My Bloody Valentine haze of “Dardanella.” “Crystal Eyes” is a mid-tempo synth dub with a Spiritualized sprawl, while “Nature #1” is a reminder the band makes increasingly interesting records.

Vinyl collectors will appreciate that the remix CD is only eight tracks split between two sides of vinyl for better fidelity. Puzzlingly, four of these remixes were previously released, but the only people already owning them would be… vinyl collectors!

The overall sound quality of the live CD is very good, which means it cannot hide Burgess’s pitchy “Polar Bear” or how the unbearable “Just Lookin’” is just too high for his register. The sequencing jarringly fast-forwards to 2007 and again to 2015, easily forgotten after an emotional Burgess vocal in “My Beautiful Friend” and the restrained gospel of “Trouble Understanding.” Bassist Martin Blunt did an excellent job compiling A Head Full of Ideas, a comprehensive retrospective full of extras for fans.

Charles T. Stokes is a nonprofit resource development coordinator and donor researcher based in Denver, USA. He’s also a tennis player and writer looking to make a racket with his own noises. “There are places in the world where one cannot publicly listen to or perform whatever music they choose without fear of harassment or prosecution. The freedom to write about new music is power, a privilege.”
RELATED ARTICLES
album reviewalbum reviewsc'mon c'mon
10