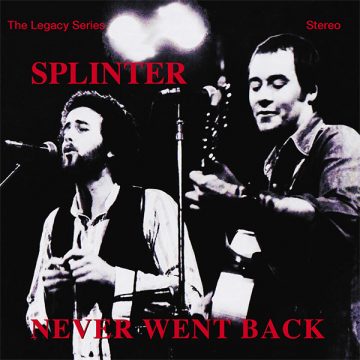 British duo Splinter’s first three albums were released on George Harrison’s Dark Horse Records label between 1974 and 1977.   Although they were never able to match the success of their debut, they continued to release fantastic music until 1981.  They should have been huge, but international stardom was just out of reach. Although they called it a day in 1984, they are now releasing their first new album in 39 years.

Never Went Back consists of highly polished rehearsals for their 1981 tour with Leo Sayer. It could have been called Splinter Unplugged, because it is basically Bill Elliott singing (and providing the occasional harmonica) and Bobby Purvis on acoustic guitar. The majority of songs on this album are from, what would turn out to be their final album, Splinter. Here, the songs are stripped back to bare bones and benefit from this arrangement.

One gets to hear their gentle harmonies and strong melodies without the heavy and slick production of their last album. That is not to say that Splinter is a bad album, because it isn’t. There, the songs fall into the ‘soft rock’ category, while here they become folk classics. Elliot’s incredibly strong vocals and Purvis’s flawless guitar work breathe new life into the songs. The best example is “Sail Away”, which has a beautiful melancholic tone to it.

There are three new tracks here. “Pull On Your Heart Strings” has a wonderful Everly Brothers feel to it, which works exceptionally well. The newer ones fit comfortably with the other tracks and come together to form a brilliant album.

Never Went Back reminds one of the exceptional talent of Splinter. The two gentlemen wrote, performed, and produced an album that really needs to be rediscovered and brought out to the world. It serves as a gentle reminder of their absolute talent.  Although it is a collection of rehearsals it sounds great and the band is in top form. Work has been done on the tapes (with some minimal overdubs) but nothing is lost in the preparation for release. Overall, this is a very welcome addition to their already stellar catalogue.

Born and raised in Whitby, Aaron discovered music through his love of The Beatles. This led to a career in radio, writing for various publications, and ultimately a radio show about The Beatles (Beatles Universe), which ran for over four years. When not immersed in music, Aaron enjoys spending time with the loves of his life -- his wife Andrea, and daughters Emily and Linda (all of whom have an intense love of music too).
RELATED ARTICLES
album reviewalbum reviewsgeorge harrison
8.0