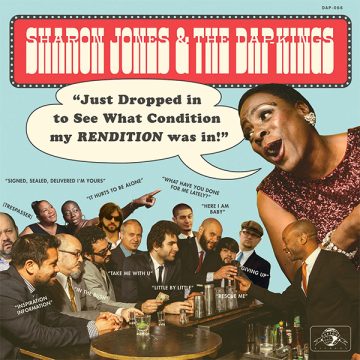 After passing away following a battle with cancer in 2016, Sharon Jones and her backing band, The Dap Kings, left behind a legacy of classic soul made for the 2000s. Having released her final album, Soul Of A Woman, posthumously in 2017, Jones & The Dap Kings are back with Just Dropped In (To See What Condition My Rendition Was In). The latest studio album is a collection of covers that were previously released as standalone singles, were released through various compilations and soundtracks, or have remained unheard until now.

Sharon Jones & The Dap Kings truly are an incredible pairing; her magnificent voice reminiscent of some of the greatest soul vocalists and the band showing a level of sophistication and taste to bring their arrangements to life with a priority on grooving hard, as best heard on the album’s closing track, an instrumental cover of Bad Medicine’s “Trespasser”. Among the 13 tracks, the brilliant adaptation of Prince’s “Take Me With U” is a stunning example of sublime yet drastic adaptation that feels both familiar and brand new. Furthermore, the Woodie Guthrie anthem “This Land Is Your Land” is almost unrecognizable with its slow swagger and lush accents from the horn section. Additional highlights include covers of The Marvelettes’ “Here I Am Baby”, Gladys Knight’s “Giving Up”, and Bob Marley’s “It Hurts To Be Alone”.

A passion for music has always been a part of Gerrod’s life. As a young boy, he was raised on a steady diet of the music from The Chili Peppers, Aerosmith, The Stones, Prince, and others from his mum. Raised in the GTA, Gerrod continued to foster his love for music by attending a wide range of concerts and learning the drums. His unapologetic passion for music has no bounds and has spread to a wide variety of styles, whether it be the 90’s rock that sound tracked his teenage years, the jazz he studied in university, or his newfound love for hip-hop. He recently received his bachelors in music and education from York University and is passionate about writing and reviewing good (and less than good) music. Gerrod is also the drummer and songwriter for a Toronto based rock & roll band, One In The Chamber.
RELATED ARTICLES
album reviewalbum reviewssharon jones
8.0