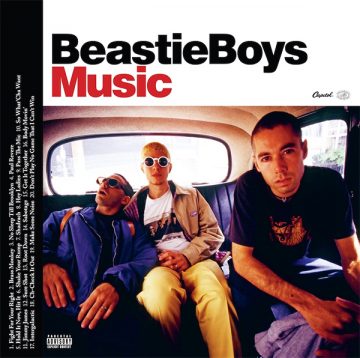 The last two years have seen a revival of interest in the Beastie Boys. Starting with their 2018 memoir and one of the best music books you’ll find, Beastie Boys Book, the group has since reunited with longtime music video director Spike Jonze to document their career in last year’s Beastie Boys Story. Now, to tie it all together comes Beastie Boys Music, a greatest hits collection that highlights the one of a kind quality that has propelled the Beastie Boys forward since ‘79.

Opening with the lo-fi, self-sampled jams of “So What’Cha Want”, Beastie Boys Music is an immediate reminder as to just how innovative and dynamic the group was. Nobody before or since has walked such a fine line that has intertwined classic, alternative, and punk rock into hip-hop in such an experimental and massively successful manner – “So What’Cha Want” is the very essence of just that.

Of the twenty songs, Beastie Boys included mega hits such as blockbuster hip-hop tracks “Intergalactic”, “Ch-Check It Out”, and “Hey Ladies”, their infamous rap-rock thrashing on “No Sleep Till Brooklyn” and “Fight For Your Right”, and sublimely brilliant alternative hip hop, including “Sure Shot”, “Shake Your Rump”, “Root Down”, and the iconic “Sabotage”. Curiously, the album also features lesser known singles, such as “Don’t Play No Game That I Can’t Win” featuring Santigold, “Shadrach”, “Get It Together”, and “Jimmy James” which further emphasises the experimental edge that the hip-hop innovators brought to the genre. Beyond the genuine goofiness and the early frat boy image, all eight studio albums the Beastie Boys released between ‘86 and 2011 were complete musical experiences that pulled listeners in deep for a ride that was unlike the last.

Beastie Boys Music is an exciting and thrilling greatest hits package that surpasses that of 2005’s Solid Gold Hits. It serves as a needless reminder to just how fun and stupidly brilliant the band was, and ultimately how much emptier the world seems since the unexpected and tragic passing of Adam Yauch in 2012. That being said,  in the age of expanded collections, it would be nice to hear some demos, unreleased tracks, and rarities. More so, the lengthy jams that provided the sonic foundation for Check Your Head and live collections, such as their incredible final concert at Bonnaroo 2009, or from their jaw dropping ‘99 tour (seriously, check out Glasgow 1999 on YouTube), would make for incredible releases that would further demonstrate a legacy truly unlike any other. Until then, Beastie Boys Music signals a peak in the current Beastie revival that we can only hope continues to grow throughout the coming decade.

A passion for music has always been a part of Gerrod’s life. As a young boy, he was raised on a steady diet of the music from The Chili Peppers, Aerosmith, The Stones, Prince, and others from his mum. Raised in the GTA, Gerrod continued to foster his love for music by attending a wide range of concerts and learning the drums. His unapologetic passion for music has no bounds and has spread to a wide variety of styles, whether it be the 90’s rock that sound tracked his teenage years, the jazz he studied in university, or his newfound love for hip-hop. He recently received his bachelors in music and education from York University and is passionate about writing and reviewing good (and less than good) music. Gerrod is also the drummer and songwriter for a Toronto based rock & roll band, One In The Chamber.
RELATED ARTICLES
adam horovitzadam yauchalbum review