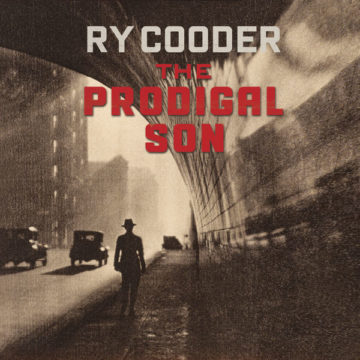 Ry Cooder has been playing since the 1960s and is one of the most respected slide guitarists to pick up a slide. He is also a brilliant guitarist, he is stunning at playing multiple instruments. On top of all of that, he is a brilliant writer. His first album was released in 1970 (Ry Cooder). The Prodigal Son is his 17th solo album and his first album in six years. For the record, he has also released a further 17 soundtrack albums, so he has been quite busy. His last album was the political Election Special (2012).

Although known for blues playing and roots music, Cooder has never been one to shy away from politics, and on The Prodigal Son, politics is evident throughout. There are covers, but the entire album serves as sort of a road map to the decline of morality in society. It is interesting that old songs by Blind Willie Johnson (“Everybody Ought To Treat A Stranger Right” and “Nobody’s Fault But Mine”, which date back to 1930) can resonate so well in today’s world. Cooder is basically saying that things have not changed.

Listen to “Gentrification”, a song Cooder wrote with his his son, Joachim, who also co-produced the album. Cooder sings:Through the song, “Gentrification”, Cooder is pointing out that the working class and working poor are being shoved out for style.

“Gentrification is here, sho’ is worryin’ my mind.
Can’t understand why an uptown Google-man
Wants a downtown room like mine.”

For Cooder, some of the answer comes in spirituality. Not religion, but spirituality. He even has his turns at ‘fake’ Christians in the song “You Must Unload”, a song written by Blind Alfred Reed over 60 years ago. Cooder’s guitar and banjo playing are inspirational in this song and it is one of the highlights.

Cooder dips into the past for songs that are not considered classics, but should have that distinction. Thanks to his production and wonderful playing, the older songs fit perfectly with his new songs. Perhaps it is due to the fact that his new songs have a bit of classic blues to them. However he does it, Cooder has crafted a coherent, consistent album. A concept album, no less.

His instrumentation is near perfect and the backup band he has selected serve up the rhythm and blues/blues near perfect.

Cooder has reached legendary status, and at this point in his career he really has nothing to prove. He could continue to put out music and he would have an audience. The fact that, like McCartney, Dylan, Prine and other contemporaries, Cooder has something to say, it is all the more impressive. The Prodigal Son is a brilliant album, and I like the fact that he is comparing himself to the Biblical “prodigal son” both as a title and the content of the album. An excellent album.

Born and raised in Whitby, Aaron discovered music through his love of The Beatles. This led to a career in radio, writing for various publications, and ultimately a radio show about The Beatles (Beatles Universe), which ran for over four years. When not immersed in music, Aaron enjoys spending time with the loves of his life -- his wife Andrea, and daughters Emily and Linda (all of whom have an intense love of music too).
RELATED ARTICLES
album reviewalbum reviewsfantasy records
9.0