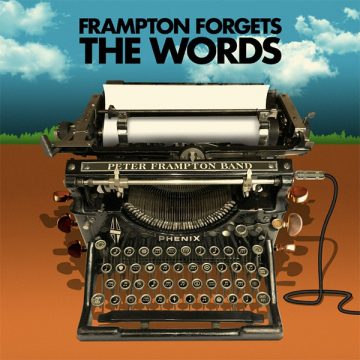 When a new album from an aging rock star is released, the fact is often received with a bit of an eye-roll. “Who do they think they are? Their best years are behind them…” – that sort of thing. It would be easy to write off such an album, unless that artist is Peter Frampton.

What a career Frampton has had: co-founder of Humble Pie (one of the first-ever supergroups); collaborator and friend of David Bowie and George Harrison; the creative force responsible for the multi-million-selling1976 release, Frampton Comes Alive!. For folks of a certain generation, Frampton and his music were obsequious, for a time. As fictional film character Wayne Campbell wryly observed of Frampton’s famous live album, “If you lived in the suburbs you were issued it. It came in the mail with samples of Tide!”

Frampton’s rise to fame, and his subsequent fall are the stuff of legend. But through it all, he never stopped working. Even after his 2019 announcement, which revealed that he suffers from degenerative muscle disease, Frampton was out on the road for a ‘farewell’ tour. As he stated at the time, “In a year’s time, I might not be able to play. I want to go out screaming.”

Showing no signs of slowing down, Frampton has, in recent years, released two albums – 2019’s All Blues (which spent 15 weeks at #1 on Billboard’s Blues chart), and his just-released album of favourite cover songs, Frampton Forgets The Words. The new album is his first all-instrumental release since the Grammy Award-winning Fingerprints (2006).

What strikes the listener from the outset, is the clean sound that was achieved on this recording. It is very much like a jazz album in that regard: very studied and articulate, with pristine arrangements. All instruments are well-recorded, with special note to be made of the bass sound, and how well the drums were miked, with a rich presence.

The star of the recording is, of course, Frampton’s guitar. For this project, he used his infamous 1954 Les Paul Phenix exclusively – a guitar which had been lost in a plane crash in 1980, and recovered by the artist more than 30 years later. Frampton plays his legendary axe masterfully, employing the tone and skill that he has honed over his 50-plus year career.

If there is a stone to be cast at this album, it can be found in the ‘sameness’ of the sound, and the fact that the performances are at times understated. The cover of Bowie’s “Loving The Alien”, and the opening track (Sly and the Family Stone’s) “If You Want Me To Stay” sees the guitarist noodling a bit into Carlos Santana territory. That said, there are other tunes that absolutely sizzle. Frampton’s take on Stevie Wonder’s “I Don’t Know Why”, and Lenny Kravitz’s “Are You Going To Go My Way” totally rock. Additionally, his guitar work on “One More Heartache” by Marvin Gaye, is an obvious standout.

It is natural to miss the original vocal performances on famous songs, but Frampton artfully applies his guitar’s voice in place of a human one. With skill and nuance, The Peter Frampton Band make these songs their own. It is a bold move to take well-known songs by iconic artists and give them the instrumental treatment. If rock pedigree, amazing chops and awesome tone are your thing, this collection is a must-have. Kudos to Frampton to still be active in music and putting out new recordings. Does the world need this album? The answer to that is, “Who cares?”! Frampton Forgets The Words is the work of a master musician doing what he loves.

Bryan Williston has been involved in music since he was a young child. A veteran singer, songwriter, and music educator, Bryan has enjoyed playing a multitude of musical genres in a variety of outfits, over the years. Bryan lives in Whitby, Ontario.
RELATED ARTICLES
album reviewalbum reviewsgeorge harrison
9.0