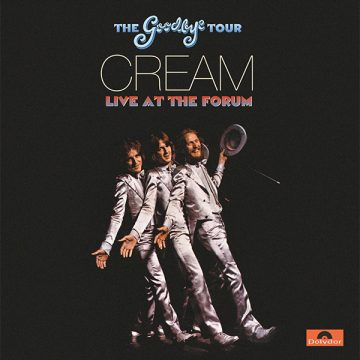 This is some heavy Cream. “Sitting On Top Of The World” was where the band once stood, and where they stood while recording this particular Los Angeles show, back in 1968. The performance is available on vinyl for the first time, previously only available as a part of 2020’s 4-CD set of the Goodbye Tour of 1968. This 2-LP format narrows the focus on the best part, Live at the Forum. Audiophiles will take pleasure in owning this limited blue vinyl edition, while others who were satisfied by a quick listen on Spotify or YouTube may likely move on.

Eric Clapton and the band once reflected on the live Cream experience years after the break-up, expressing how their performances were not always honest as the band over-indulged themselves without caring about the audience. You can hear this sentiment played out on extended jams, as one heard here on “Spoonful”, which takes up the entire fourth and final side.

The songs do get heavy at times, and perhaps heavier than the band anticipated or even wanted. Calling Cream heavy metal is utter folly. Jack Bruce once implied that Led Zeppelin is responsible for Heavy Metal and not them. On this recording you can hear all the reasons, all the improvisations, and all things getting heavy. “Sunshine Of Your Love” is the one that should have gone stale in their setlist, but they are able to milk it because they relish the notion of having no idea how the middle solo section is going to turn out.

The vocal harmonies on “White Room” are there to make up for the studio overdubs, because as with any band, it can be hard to replicate material on stage. Cream works it out and delivers the goods. Drummer Ginger Baker takes on a solo for “Toad” with an approach of both fire and finesse. The instrumental is delivered exquisitely by the whole band, with subtle hints of pop sensibilities applied from a unified Eric Clapton and Jack Bruce playing the last four notes just before the drum solo starts.

Cream came and went so fast, that one could easily make sense out of Neil Young timeless quote, “it’s better to burn out than to fade away“. If the band was not always honest with their audience, then they were certainly brutally honest with each other. When you are that honest, it’s not always pleasant news, and the disbanding of Cream was not a welcome state of affairs. In the following weeks, many fans across the globe expressed disappointment with the breakup, including both John Lennon and Jimi Hendrix. Unlike The Beatles, Cream was able to exit with peerless dignity, and to embark on a proper “Farewell Tour”. The music is still relevant on this limited-edition release because Cream was running on all cylinders, on top of their game — “Sitting on top of the world”.