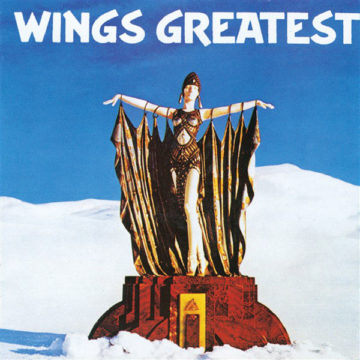 Over the last few years, Paul McCartney has rereleased several of his albums, usually in a variety of formats and usually in expanded editions. On May 18, 2018 he is rereleasing four albums on vinyl (coloured and black) that have not been available on vinyl for quite some time. The albums are also available for streaming and on CD. They have also been remastered, usually the original analogue tapes.

Wings Greatest has been out of print on vinyl and CD since the 1990’s. Since then McCartney has issued several compilations, but this was his first ‘greatest hits’, originally released in 1978 and released to complete his deal with Capitol records at the time, as he was moving to Columbia/CBS Records in North America. At the time, the largest record deal in history.

The album made history for its sleeve design, which was the most expensive design up to that date. McCartney had his statue flown to the Alps so photographer Angus Forbes could take the picture from a helicopter. Real snow, real blue sky, real everything.

Every song on the collection was a top ten hit if not a number one. The sole exception was “Mull Of Kintyre”, which was a number one hit in the U.K., and the largest selling single of all time until Elton John’s “Candle In The Wind”. In North America, it did not perform nearly as well, and in fact, the B-side “Girl’s School” got more attention. But the album was more than a collection of hits, it was also a chance for McCartney to gather up songs which had only been released as a single, which was a common practice in those wonder 1970s days. Songs like “Another Day”, “Live And Let Die”, “Hi Hi Hi”, “Mull of Kintyre and “Junior’s Farm” had, at that point, never been on any albums, so it was nice to have them in one collection.

The other selling point for this compilation is that McCartney chose to use the original album versions of the songs. Future complications would use the seven inch edits for the some of the songs, “With A Little Luck” being a great example of a song which was almost cut in half for radio play.

It is nice having Wings Greatest back. It was also a  great decision to make this a straight rerelease rather than altering the tracks, or adding bonus material. The album replicates the original packaging, which includes a poster and inner sleeve, and the blue vinyl is quite striking. It has been remastered and it sounds amazing.

Born and raised in Whitby, Aaron discovered music through his love of The Beatles. This led to a career in radio, writing for various publications, and ultimately a radio show about The Beatles (Beatles Universe), which ran for over four years. When not immersed in music, Aaron enjoys spending time with the loves of his life -- his wife Andrea, and daughters Emily and Linda (all of whom have an intense love of music too).
RELATED ARTICLES
album reviewsmplpaul mccartney