SPILL ALBUM REVIEW: MATT DORRIEN – IN THE KEY OF GREY 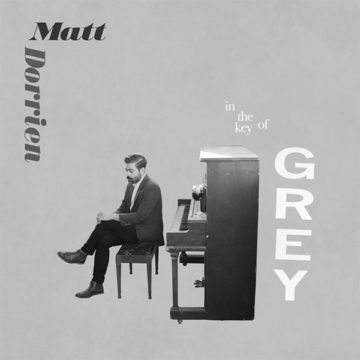 The first track, and first single from the album, “Baby I’m So Lost” sounds like a long lost Harry Nilsson outtake. This is not a criticism, quite the opposite. The arrangement and music in combination with the lyrics takes the listener back to a different time and different space. The song sets the tone for the album.

Let me say, I love this album. It is so out of step with contemporary music today that it is one of the most alternative albums I have heard in 2018. This album could have come out in 1973 during the peak of singer/songwriters. And it is a craft seriously missing today. When one listens to In The Key Of Grey names like McCartney, Nilsson, Newman, King, Taylor come to mind. These are pretty heavy hitters with whom to be compared and Dorrien does compare favourably. He is a peer, not a follower. His use of melody and structure of lyrics are fantastic.

The songs are piano based pop music. Interestingly, the piano Dorrien used to write and record the songs was a gift from his girlfriend when she left him. A parting gift. The songs are about break-ups and loneliness. The arrangements are sparse and simple, some horns at times, but for the most part, bare arrangements, which fit the songs. “Mister Pour Another” is a good example, basic piano, and tasteful slide guitar easing in and out.

Lyrically, it is very sad album about loneliness and rejection. There is some introspection, but overall, it is a concept album, of sorts, documenting a break-up. But, in true singer/songwriter style, he uses phrases and lyrics that have a tinge of hope and optimism. Perhaps things will get better for Dorrien, if only she comes back to him.

In The Key Of Grey is a very unique album. Dorrien is very talented and this album would translate extremely well live. The songs are deceptively simple, but when one delves into the song, there is a lot going on with each song. This is a great album.

SPILL ALBUM REVIEW: MATT DORRIEN – IN THE KEY OF GREY

Born and raised in Whitby, Aaron discovered music through his love of The Beatles. This led to a career in radio, writing for various publications, and ultimately a radio show about The Beatles (Beatles Universe), which ran for over four years. When not immersed in music, Aaron enjoys spending time with the loves of his life -- his wife Andrea, and daughters Emily and Linda (all of whom have an intense love of music too).
RELATED ARTICLES
album reviewsmama bird recording co.
8.0