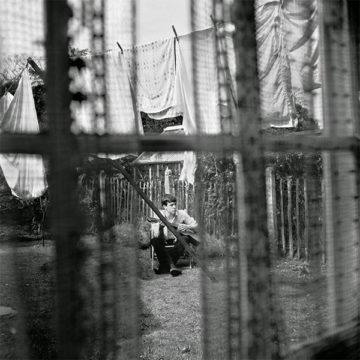 Paul McCartney has made a point of reissuing his older albums over the last few years. Usually these take the form of expanded box sets, but on May 18 he is rereleasing four albums on vinyl and CD that have been out of print in both formats. Chaos And Creation In the Backyard is a curious addition as it is only 13 years old and it is straight reissue of the original vinyl. I am not always crazy about box sets and expanded releases, however Chaos And Creation In the Backyard would have benefitted from the expanded format, given the amount of singles and bonus tracks released at the time. The original vinyl is near impossible to find, so it is nice having it available again, both in coloured and black vinyl.

Chaos And Creation In the Backyard is a brilliant album. McCartney took George Martin’s suggestion to heart, and hired  Radiohead producer Nigel Godrich to sit at the controls. The result is that McCartney and Godrich  produced some of the finest songs of his career, both with and without of The Beatles. Few albums are as flawless as this. Kicking off with the piano driven and experimental “Fine Line” and ending with the glorious “Anyway”, this album is full of introspection, beautiful melodies, and stunning imagery.

McCartney plays most of the instruments on the album, and is joined by Godrich, his excellent current backup band (Brian Ray, guitar;  Rusty Anderson, guitar  and Abe Laboriel Jr., drums) and artists such as Jason Falkner, Joey Waronker and James Gadson.

McCartney looks inward on this album. He also grapples with the past and its impact on his present. “Looking through the backyard of my life, Time to sweep the fallen leaves away”, he sings on “Promise To You Girl. The album’s theme could be summed up in those lines.

And McCartney has never sounded so angry, as he does in “Riding To Vanity Fair”:

“You’re not aware,
Of what you put me through.
But now the feelings gone,
But I don’t mind.
Do what you have to do,
You don’t fool anyone.”

Given this was written as his marriage to Heather Mills was breaking down, one can assume to whom this is directed. A very personal and honest song. As is most of the album.

Chaos And Creation In the Backyard is a masterpiece, and this reissue gives everyone time to catch up on the brilliance of the album. There is not a weak song on this album. Upon its release, it was a worldwide top ten album, although it received very little radio support in Canada. This is a pity as it is very radio friendly, and had this album been released during the 1970s it would be heralded as a classic album. The truth is, it is a classic album. Perhaps the time has come for Chaos And Creation In the Backyard.

Born and raised in Whitby, Aaron discovered music through his love of The Beatles. This led to a career in radio, writing for various publications, and ultimately a radio show about The Beatles (Beatles Universe), which ran for over four years. When not immersed in music, Aaron enjoys spending time with the loves of his life -- his wife Andrea, and daughters Emily and Linda (all of whom have an intense love of music too).
RELATED ARTICLES
album reviewsmplpaul mccartney