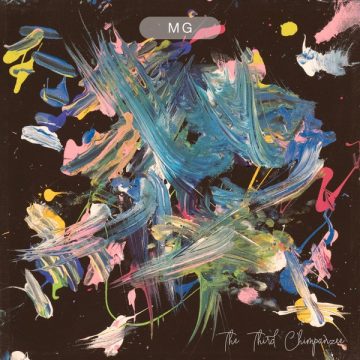 Confounding those expecting Gore’s trademark gloom, The Third Chimpanzee is a fun listen. Although there’s less variation in this menagerie than in Gore’s soundtracky 2015 album, MG, the EP has a dubby, idiosyncratic feel, like it came together quickly. Some of the slippery, elastic analog synth sounds may seem to be whimsically splashed about, but there’s nothing perfunctory about how the tracks are constructed and produced. This is thinking, rather than dancing music.

Each track is named after a monkey, and viewed through a naturalistic lens, these simians represent aspects of the human condition. “Howler” spends 80% of its day resting, so it embodies laziness. The opening track’s processed, panning guitar squawks and plodding stomp slowly sparks its circuits; an animus awakened from electrical slumber is once again beholden to charged particles. The conservation status of the flamboyant “Mandrill” is listed as Vulnerable, so the inexorable march of its complex, stutter-step rhythm might symbolize our endangered individuality. The highly social “Vervet,” a funky, 4/4 track of percolating synapses, personifies family or communication: music for the masses. The bass swells and gurgled chants of “Capuchin,” with the cap of hair on its head like a friar’s cowl, represents devotion—kinky religious imagery in Gore’s songs for Depeche Mode has paid the rent for decades, after all.

The fragile, fleeting eulogy of “Howler’s End” isolates the first track’s clarion melody. Howlers often end each day with low, guttural vocalizations, warnings so families might avoid one another. Perhaps this is where humans are heading, too.

Charles T. Stokes is a nonprofit resource development coordinator and donor researcher based in Denver, USA. He’s also a tennis player and writer looking to make a racket with his own noises. “There are places in the world where one cannot publicly listen to or perform whatever music they choose without fear of harassment or prosecution. The freedom to write about new music is power, a privilege.”
RELATED ARTICLES
album reviewalbum reviewsdepeche mode
8.0