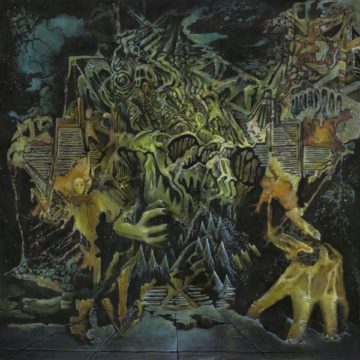 If King Gizzard & the Lizard Wizard and J.R.R Tolkien had a lovechild from Mordor, Murder of the Universe would be as close as you could get to such a scenario. The album, the band’s second release this year out of an apparent five, finds the Aussie-garage-rockers taking on the topic of doomsday.

Murder of the Universe, the Gizz’s darkest LP yet, describes the impeding doom of the world in a dark fantasy genre kind of way. The band manages to tell this strange, and sometimes repetitive tale, which takes place over 21 tracks, in just over 40 minutes.

The album begins with probably the strangest selection of songs they have ever produced. Starting with the first chapter, The Tale of the Altered Beast (Volume I), a nine-part epic that begins with the voice of a young woman describing a bizarre post-apocalyptic world. The short prologue soon ends and the Gizz begin setting the scene with a gnarly psych-rocking jam, reminiscent of “Robot Stop” from their 2016 masterpiece, Nonagan Infinity. However, the bands music never gets to the forefront of the LP. The female voice, which acts as a narrative for the entire album, is fine for awhile, but after several tracks grows tiring and makes you feel as if you’re stuck inside of a medieval video game. Her calm, flat voice is quite the contrast from the hectic music played underneath her narration. Despite being an incredibly ambitious touch to this intense record, it seems better suited for a geeked-out metal band aspiring to be the next Dream Theater.

Although the tracks bleed into one another like Nonagan Infinity, the constant narration gets to the point where it overpowers the music. And while it may not be as badass as the music on Nonagan, it still deserves to stand out. After all, that’s why we’re listening.

By the time we come to the third chapter, Han-Tyumi and the Murder of the Universe (Volume III), when the male narrator takes over it becomes almost unbearable. Though he probably is meant to sound like a robot, it is almost worth it to skip the last segment of the album because of its annoyance. Christ, Gilbert Gottfried would have been a more enjoyable narrator, and probably more entertaining as well.

While Murder of the Universe maybe clumsy outing for the band, they still have three more albums due out this year that can make up for it.

As a child growing up in the suburbs, Ryan found music as a way to soothe his boredom. After first hearing AC/DC at the age of 10, he was hooked on music. Tracing its roots to the ‘50s, he became obsessed with Elvis, Buddy Holly and Chuck Berry. Somehow that led to grunge, then psych-rock, then jazz, etc. The list goes on and on and his collection of vinyl records continues to grow.
RELATED ARTICLES
album reviewsato recordsking gizzard & the lizard wizard
7.0