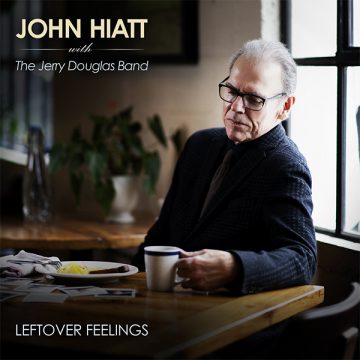 It sounds like the beginning of an old joke: two guys walk into a bar, and… but this is no joke. The ‘guys’ are two giants of Americana – singer-songwriter John Hiatt, and dobro player/producer Jerry Douglas. The ‘bar’ is the legendary RCA Studio B in Nashville. The fruit of their collaborative labours, Leftover Feelings, is a brilliant new album which showcases the art and talent of both of these masters.

Recorded live off the floor in the storied Studio B, Hiatt, with Douglas and band, turn in some stunning performances. The setlist is classic Hiatt: sad songs of distance, loss, and regret, with familiar grooves and lyrical turns-of-phrase. Douglas and band make the songs even better, with beautiful, intuitive performances filled with emotion and nuance.

For fans of singer-songwriter and Americana genres, this album is ideal. The single, “All the Lilacs in Ohio” is an obvious standout, though it is somewhat derivative, both of Hiatt’s own work, and of artists like Bob Dylan and Steve Forbert.

Despite the absence of drums on this album, The Jerry Douglas Band really helps to move things along on up-tempo tunes such as “Long Black Electric Cadillac”, and “Keen Rambler”. With these blues/roots offerings from Hiatt, one cannot help but notice parallels between this and his 1980s work with Ry Cooder, whether as a solo artist or with the roots super group Little Village. Those are surface comparisons, though. Leftover Feelings is a mature work, presented with more peace and assuredness, and with a defter touch.

True shock and emotion lives in “Light Of The Burning Sun”, a song about Hiatt’s older brother’s death by suicide at the age of 21. Here, Hiatt’s honest rasp is coupled by Douglas’ sweet dobro, which becomes an extension of the singer’s soul. Together with the band, they express a sadness so real and visceral, it washes over the listener and makes the flesh tingle.

The real beauty of the pairing of these two artists lies is in how one complements the other. Leftover Feelings features John Hiatt and The Jerry Douglas Band doing what they do best. Such all-star pairings are not always successful, but this album is right on the money.

Bryan Williston has been involved in music since he was a young child. A veteran singer, songwriter, and music educator, Bryan has enjoyed playing a multitude of musical genres in a variety of outfits, over the years. Bryan lives in Whitby, Ontario.
RELATED ARTICLES
album reviewalbum reviewsnew west records
8.0