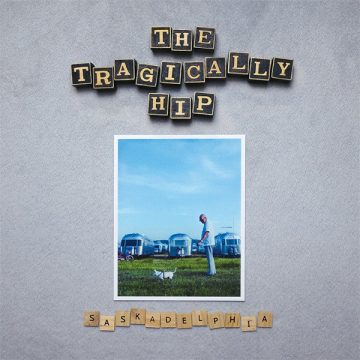 Saskadelphia, the new Tragically Hip release, should not disappoint the many fans who have been anticipating hearing these five unreleased songs, once injected into various setlists spanning the band’s career from 1987 up to 2000.

The element of surprise happens right away in the first song and lead single, never before heard “Ouch”. This is a new song that is completely unknown to fans.

“Crack My Spine Like a Whip” is probably the most familiar of the bunch. I have twenty-year-old memories of friends and fans bragging about the show they saw when the band opened with this song. I do remember the many bootleg cassettes and YouTube uploads of the unreleased tune, but it is nice to have a crisp studio version available. It’s a good thing the song was kept off the first time around because it may have gone stale. It is a fast-paced rocker of a song, and it is pleasing to see its inclusion on this initial release celebrating 30 years of Road Apples.

There is a poignant live performance of out of Montreal’s Molson Centre in 2000 of “Montreal”. It is included here as it comes out of the same 1991 sessions, but more importantly, the performance was only several kilometres away from the Ecole Polytechnique where the massacre took place 11 years prior to this particular show. It is a fitting tribute, introduced as “a song about the identification process”. The song’s minor key and somber lyrics by the late Gord Downie, “her Mama’s gonna make her look good“, features haunting background vocals by guitarist Paul Langlois. It is an unfortunate notion, settling on the Montreal Police Department as the place where the identification process of the victims takes place. There is at times a peace in some songs, and when “Montreal” plays, it is felt here as a step in an ongoing healing process.

The band opened their earlier shows from the late ‘80s with Saskadelphia’s final track, “Reformed Baptist Blues”, a highly energized piece composed by bassist Gord Sinclair. It is easy to see how some of these songs had sufficient punch to become deserving enough to be played on the road, but ran out of gas in the studio.

The tracks are perfectly sequenced here with some in-between banter, right up to the tail end when Gord Downie asks engineer Bruce Barris, “Can you just boost me in my headphones just a tad”.  It’s a shame that “New Orleans Is Sinking” live, the “Killer Whale Tank” version, could not find a place on here considering it was from this same period recorded at Hollywood’s The Roxy in 1991. One way or another, we are most likely to hear more previously unreleased songs down the road in a series of rarities yet to be dealt with. Saskadelphia is a great start.