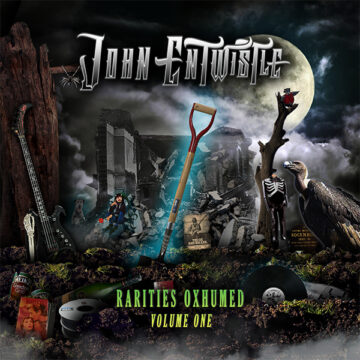 Probably only Who fans, and maybe people of a certain age, will remember that John Entwistle had a very solid, and long standing solo career beginning in the 1970s and continuing well into the 2000s.  He never had a solo hit (his highest charting album was 1981’s Too Late The Hero, which peaked at number 71 and the title track as a single peaked at number 76) but that is not to say his solo albums were not very good, quite the contrary. He released some extremely brilliant albums over the years. And because he recorded a great deal, there is quite a bit left unreleased. Longtime friend and collaborator Steve Luongo has been given access to the archives and assembled the first in a series of unreleased and rare racks by The Ox .

Although a brilliant writer, Entwistle was not very prolific. To be frank, the best material Entwistle recorded as a solo artist was released on his albums, But that does not mean that the songs collected here are not good or worth hearing, quite the opposite is the case. The tracks are what one would expect from a member of The Who. This is straight ahead rock ‘n’ roll, leaning towards the heavier style of music.  For example, “I’ll Try Again Tomorrow” is hard rock to the core. It is a great song, featuring Entwistle’s distinct bass and strong melody. This is a remaster and slight remix from the album Music From Van-Pires released in 2000. Here it sounds more vibrant and cleaner. “Bogeyman” is also taken from that album and features Keith Moon on drums. “Bogeyman” is a demo recorded by Entwisle and Moon for the album Who Are You. Luongo and The John Entwistle Band filled out the sound, the end result is quite astounding.

Fans of The Who will enjoy the live version of The Who’s “Trick Of The Light” (which Entwistle wrote for the Who Are You album), recorded during Entwistle’s last solo tour of 2001, as it is just a powerhouse and shows how Entwistle must have wanted the song to sound, as opposed to The Who’s version. Also, the alternative version of “Left For Dead” (another track from Music From Van-Pires) is much longer and demonstrates Entwistle’s ability to write a very melodic and catchy song. Hearing it now, one can only wonder why it was not a hit single for Entwistle.

The demos of two songs written with Luongo are also revealing. “Where Ya Going Now” and “Life Goes On” could have both been Who songs and one cannot help but hear Roger Daltrey’s voice in both. Both songs are solid melodic rock songs and very enjoyable. Equally interesting is the live version of “Under A Raging Moon”, a song recorded by Daltrey and served as a tribute to Keith Moon. Here, the song is clearly meant as a tribute to Moon and is very epic in its scale.

There is enough ‘new’ music here for fans of Entwistle and The Who that will make Rarities Oxhumed – Volume One well worth their while to invest in this album. Not every song is a gem but every song is interesting. This does allow one to see behind the curtain and gain a small understanding into Entwistle’s desire to create his own music separate from The Who, while other songs show his love for the band and his desire to contribute to albums as well. It is a great start to what is hoped to be a fascinating series of albums.

Born and raised in Whitby, Aaron discovered music through his love of The Beatles. This led to a career in radio, writing for various publications, and ultimately a radio show about The Beatles (Beatles Universe), which ran for over four years. When not immersed in music, Aaron enjoys spending time with the loves of his life -- his wife Andrea, and daughters Emily and Linda (all of whom have an intense love of music too).
RELATED ARTICLES
album reviewalbum reviewsbogeyman
8.0

by Gerrod Harris on February 3, 2023
FANTASTIC NEGRITO GRANDFATHER COURAGE STOREFRONT RECORDS Fantastic Negrito made waves with his creative odyssey of a 2022 album, White Jesus Black Problems, an album which tackled the story of his mixed ancestry in the era of American slavery, [...]
8.0