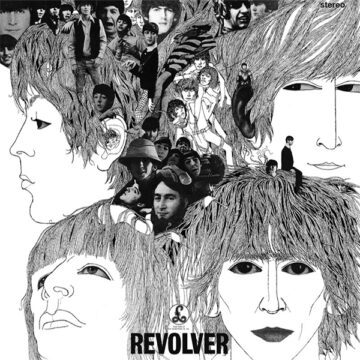 The Beatles entered EMI Studios on April 6, 1966 to begin work on their follow up to their brilliant, ground-breaking, and landmark album Rubber Soul. The fact that there was no album between Rubber Soul and Revolver was a huge change for The Beatles, as it seemed to be a long time. In 1964 and 1965 The Beatles released two albums a year, in 1966 that changed to one album a year. For various reasons time was set aside in early 1966 and before going into the studio, John Lennon is credited for saying “One thing’s for sure, the next LP is going to be different.” How right he was.

For my money, Revolver is The Beatles best album, you may not agree, but for me this is my favourite album and it is more than a little surprising that it has taken this long for this album (and companion single “Paperback Writer”/”Rain”) to receive the deluxe treatment. But here it is in all of its glory. The Beatles finished recording the album on June 21, 1966 and the album was in the shops on August 5, 1966. The music world was never the same. The musical and lyrical innovations that Revolver established are numerous, and sadly, there is not enough room in this review to list them all.

The original album is pure classic. Musically, it is a very diverse album featuring straight ahead rock, a string quartet, sitar, avant garde, ballads, a kids song, soul-infused rock and so much more. All of this contained within 14 songs. A brilliant moment in rock ‘n’ roll history. From the opening count in of “Taxman” until the fading seagulls (well, not really seagulls) of “Tomorrow Never Knows”, The Beatles let loose with their imagination. Revolver was full of experimentation, which does not always mean avant garde. “Elanor Rigby” would become the first number one single without one standard rock instrument in the song. In fact, none of The Beatles play on it, and yet it is a Beatle track. Then listen to the loops of “Tomorrow Never Knows” and the drone sound that predates drone music by about 50 years. Then listen to the horn section on “Got To Get You Into My Life”. Here The Beatles combine jazz and rock that will, a few years later, define a few bands’ sound (i.e Chicago).

As with the previous Beatle box sets, Giles Martin has remixed the entire album for a 2022 mix. He gives the album a much sharper sound. The vocals are more prominent and not lost in the mix. “Dr. Robert” has incredible energy that comes through with the new mix. “She Said She Said” benefits from the new mix as well, making the song a bit more laid back but maintaining the wonderful vocals. Martin basically takes everything his dad did and highlights certain aspects of each song. Songs like “For No One”, which features a French horn, benefits with the shiny new mix by bringing the vocals more forward while maintaining the beautiful arrangement of the song. 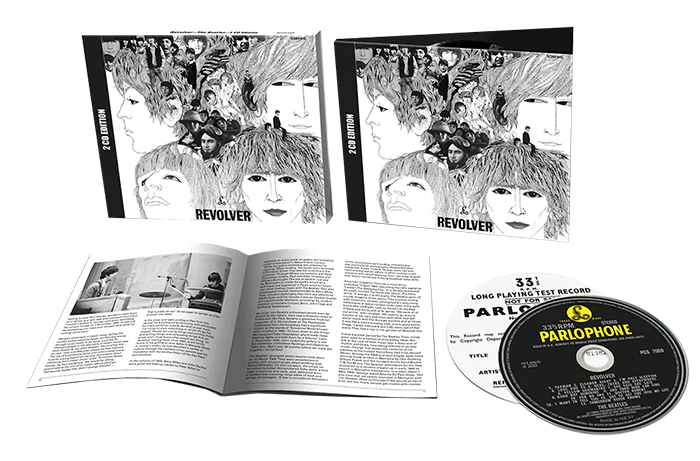 Included in the box set is the original mono mix that was released in 1966. The mono mix differs from the stereo mix in many ways. Some of the songs sound very different in mono, especially “Tomorrow Never Knows” which benefits from the mono mix, giving it a much more dense and eerie sound. Other songs such as “Dr. Robert” and “Yellow Submarine” differ in mono. But the mono version, in many ways, is how The Beatles mean the album to be heard, much like Sgt Pepper’s Lonely Hearts Club Band. The Beatles favoured mono over stereo and spent much more time mixing for mono than they did for stereo. The mono version of Revolver is essential listening.

The goldmine of this set is the unreleased material. Demos, alternative takes, backing tracks, are all gathered over two CDs. Perhaps most interesting is “Yellow Submarine” from the early writing sessions by Lennon. The initial lyrics of the song are very different  (“In the town where I was born, no one cared. No one cared”, sings Lennon) from the eventual child/family friendly singalong. Also worth noting is the version with all of the sound effects up and much more prominent. It is fascinating to hear the layers of sound and what The Beatles and George Martin assembled to make the song as we know it now. Then there is the giggling version of “And Your Bird Can Sing” or the early take of “I Want To Tell You”. This is pure gold. The early version of “Here There And Everywhere” has a vulnerability in McCartney’s voice and the sparse sound works so beautifully.

The two CDs titled Sessions are well put together and have been extremely well-researched. Martin does not sacrifice sound quality for history and these two CDs point to why analog is much better than digital. With digital recordings, mistakes and early takes are simply deleted, These tapes have been stored and now restored and fans and others can now study and have a glimpse into the creative method of on of the most important musical forces in history.

There is also an EP that features new mixes and original mono mixes of “Paperback Writer” and “Rain”, both of which were released in 1966 as a single.

Musically and lyrically, Revolver is the sound of The Beatles working together to create a perfect album. Harrison contributes three songs, and the album sees all four working on the others songs. George Martin who produced the original album and engineer Geoff Emerick deserve a great deal of credit as well, assisting The Beatles in transforming these songs into finished classics. The demos and early recording show how this masterpiece came together. This new box set lets us look behind the curtain and find even more treasures. The outtakes are wonderful and sound fantastic. And it is fascinating that there is still material in the vaults that we have not heard and it is worth hearing. I would give this album and set an 11 if my editors would allow.