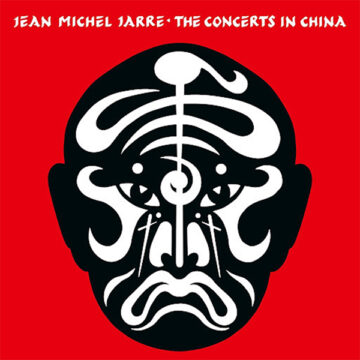 In 1981, Jean-Michel Jarre became the first western artist to tour China. He performed five concerts in Shanghai and Beijing. During the short tour, he recorded the shows, and in 1982 this historic event was released as a double album for fans all over the world to enjoy. Les Concerts en Chine is an incredible album of electronic music that Jarre pioneered. He was able to use electronics to make sweeping, melodic, almost classical music. Unlike Kraftwerk, Jarre’s music was not cold and not made for machines, but rather deeply moving and, at times, very emotional. He has developed his own style over time and has created some very incredible music. Although the album is live, he did add one studio to the package, the last track on the album, “Souvenir de Chine” (Souvenir Of China).

It has been forty years since the album has been released and to celebrate its 40th anniversary,  a new, remastered version. The title has been changed to just The Concert In China and the album is presented with some new packaging, including a previously unavailable poster. To be clear, there are no bonus tracks or additional material. However, the album has been remastered again and it sounds fantastic. In truth, the original vinyl sounded fantastic, but perhaps this is just a bit sharper.

The music is instrumental and electronic. Not dance, more art/prog rock. Jarre does employ an orchestra, The Peking Conservatoire Symphony Orchestra, on the song “Jonques de pêcheurs au crépuscule” (Fishing Junks at Sunset). It is a beautiful mixture of electronic and orchestral, in the same vein as Brian Eno, Philip Glass or Vangelis. Not that his music sounds similar, but rather in the tone and texture of the music.

Jarre was and is a pioneer in the world of electronic music. Since his debut in 1972 (with the brilliant album Deserted Palace), Jarre has experimented with sound and technology. His influence can be felt over the years and even with his 2022 studio release Oxymore (on which Eno makes an appearance), he continues to see what electronic music can do. The fact that he broke the door down into China allowing artists to perform there as well (the next band to perform there was The Chieftains). And even though the album is four decades old, it still sounds exciting and fresh.

This re-release sounds great, is nicely packaged and serves to remind us that there have been innovative artists such as Jarre. He is able to use the studio and transfer the studio work onto the stage. Of course he had some help but he is the star attraction of the show. Fans of the original album will love the remaster and newer fans can discover a true genius.

Born and raised in Whitby, Aaron discovered music through his love of The Beatles. This led to a career in radio, writing for various publications, and ultimately a radio show about The Beatles (Beatles Universe), which ran for over four years. When not immersed in music, Aaron enjoys spending time with the loves of his life -- his wife Andrea, and daughters Emily and Linda (all of whom have an intense love of music too).
RELATED ARTICLES
album reviewalbum reviewsjean-michel jarre
8.0