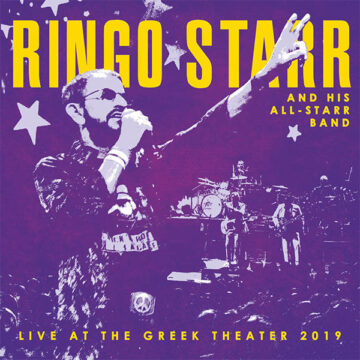 After The Beatles split up, all four of The Beatles talked about their love of playing in bands and each one joined bands, Paul McCartney had Wings, George Harrison had Traveling Wilburys, John Lennon with Plastic Ono Band. In 1989, Ringo Starr formed The All-Starr Band. In 2019 Ringo Starr and His All-Starr Band celebrated 20 years of tours and live albums. Each tour had different members, but at the core of it was Ringo Starr. He wanted to tour since the late 1970s, but he didn’t want it to be just him. The All-Starr band became the perfect vehicle for him. A chance to perform live, with a band, and often with friends.

Starr has often referred to his band as the greatest 1-800 band on the road, meaning musicians from bands that are well known and would be found on those collections one would have to call 1-800 to purchase. The All-Starr band in 2019 was no exception, and included Colin Hay (Men At Work), Steve Lukather (Toto), Greg Rolie (Journey, Santana), Hamish Stuart (Average White Band, Paul McCartney), Warren Ham (Kansas, Bloodrock, AD) and long time fellow drummer Greg Bissonette.

Live At The Greek Theatre 2019 is the eighth live album Starr And His All-Starr Band has released since 1989. Because the setlists have not changed a great deal over the years, quite often there are a lot of repeats, but he would revisit songs and add new ones for each tour. For this tour, Starr brought back “Don’t Pass Me By” which is always a concert favourite. He performs all of his Beatle classics such as “Boys”, “I Wanna Be Your Man”, “Yellow Submarine”, “Matchbox” and “Act Naturally”. He also has fun with his solo hits “It Don’t Come Easy”, “Photograph” and “You’re Sixteen”, another song that he had not performed live in many tours. One other surprise is the inclusion of the stunning “Anthem” (from Starr’s album Ringo 2012). It comes off as energetic and powerful in concert. As usual the songs come off brilliantly and it is clear that Starr is having fun and he has a band that can provide a solid backup for him.

While the band serves as an excellent back-up for Starr, they have their own moments in the spotlight as well. Stuart leads the band in an energetic “Pick Up The Pieces”, the Average White band classic, while Gregg Rolie takes over for the wonderful “Black Magic Woman”, which is just a powerhouse. “Oye Como Va” is also a highlight in the set. And Colin Hay almost steals the show with the outstanding “Overkill”, “Who Can It Be Now” and “Down Under”. His voice is perfect and the arrangements do not stray from the originals but they sound fantastic nonetheless. Of course when Steve Lukather takes centre stage with “Africa” and “Rosanna” fans can be heard erupting but it is their cover of “Hold The Line” that demonstrates how accomplished these musicians really are.

Overall, Live At The Greek Theatre 2019 delivers what it promises, an all star band led by Ringo Starr. Like his shows, this is jam-packed with fun, great music and for some, memories. It is a chance for younger fans to see some of the artists who wrote these timeless songs perform them live, or at least hear them in this live recording. The concert has also been released on DVD/Blu-ray, which may be more of an interest to some than a straight live album.

Born and raised in Whitby, Aaron discovered music through his love of The Beatles. This led to a career in radio, writing for various publications, and ultimately a radio show about The Beatles (Beatles Universe), which ran for over four years. When not immersed in music, Aaron enjoys spending time with the loves of his life -- his wife Andrea, and daughters Emily and Linda (all of whom have an intense love of music too).
RELATED ARTICLES
album reviewalbum reviewsbfd
8.0