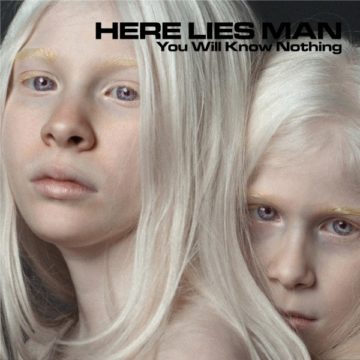 Here Lies Man
You Will Know Nothing
RidingEasy Records

Following a debut that captured the positive attention of several critics and garnered a not insignificant following, Here Lies Man’s sophomore album was always going to be a big test for the fuzzy Afrobeat band from LA. Their self-titled debut showed off the band’s original fusion and interpretation of modern stoner rock, synthy guitar effects and exotic rhythms and melodic inspiration. The result was an album with a fresh, listenable sound that showed a lot of potential but raised lots of questions over the band’s ability to progress beyond their basic sound.

From the offset, You Will Know Nothing demonstrates Here Lies Man’s desire to prove themselves with well worked ambient textural interludes bridging together tracks with creative song structures and a more refined take on their distinctively fuzzy riffage. Yet, much like on their first album, the band oftentimes finds themselves falling into a ‘Royal Blood’ trap of recording a lot of different versions of very similar songs. The first three tracks off of You Will Know Nothing revolve around a fairly fat bass riff with little variation beyond the secondary instrumentation before fading into ambient textures. This formula reappears throughout most of the rest of the album as well.

Fortunately, Here Lies Man also managed to throw a couple tracks on this album that truly stand out as different, interesting and taking the band forward with their sound. ‘Voices at the Window’, ‘Floating on Water’ and ‘You Ought to Know’ take the band’s unquestionable atmospheric talents and apply them to a softer, more experimental sound that translates very well in the format of a full track, especially in contrast with the rest of the album’s more energetic pace.

On the other hand, ‘That Much Closer to Nothing’ embraces the more droney/doomy side of the band’s influences on a track that balances their heavier tendencies with their aforementioned knack for atmospheric layering. Unlike other tracks like ‘Blindness’ and ‘Memory Games’ which (despite being strong tracks) stick to a more tried and tested formula for Here Lies Man, it’ here that we see that the band has room for progression on the heavy side of things as well.

You Will Know Nothing is a strong second effort from an intriguing band full of promise. While some tracks leave more to be desired and the band’s sound can get a little old at times (given its niche aesthetic), the album shows not only that Here Lies Man are capable musicians but, furthermore, that they’re a band that’s worth watching for in the future.

Based in Montreal but raised across Western Europe, Andrew feels at home both everywhere and nowhere. Having picked up the piano at age four, he has since gone on to add clarinet, saxophone and guitar to his musical arsenal. As well as crafting music, Andrew spends a lot of time listening both at home and in live contexts. Rather than focusing on a particular style or calibre of artist, he is keen to explore music of any shape or size. Outside music, Andrew's passions lie in philosophical writing, visual art and sharing positivity with the world around him.
RELATED ARTICLES
afrobeatalbum reviewalbum reviews
8.0