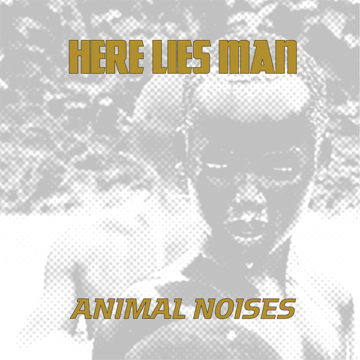 What if Black Sabbath played Afrobeat?— a question and curiosity that we never thought we’d have but that one was still nonetheless perfectly satisfied in Here Lies Man’s work and latest EP, Animal Noises. Hot off the release of their self-titled full-length debut record released on April 7th, 2017 and with an upcoming European tour that will take the Los Angeles rock outfit from Amsterdam to London, Here Lies Man have released an EP that is in both ways a soft follow up to this year’s album, while also serving as a short sampler that will give new audiences a taste of what is to come from their live shows.

Opening with the title track and “Sorrow Tears And Blood”, Animal Noises proves to already be an exciting release for new and old fans alike. “Animal Noises” is a song that lives up to the band’s artistic premise of combining hard rock from the 1970’s with the funky grooves of Afrobeat as best emphasized best by the song’s crunching chords and distorted guitar riffs contrasting with the intricate and offbeat drum groove and a call and response styled hook that runs throughout the song. The song is the perfect synthesis of rock and afrobeat with a reminiscing feeling to that of Sabbath and Rare Earth.  “Sorrow Tears And Blood” continues to do such in a near instrumental manner that uses dissonance, a darker tone, and a truly incredible riff to build a near six minute song that is nothing short of epic. Its long instrumental sections display a very high level of musicality and an energy that feels live. It’s a sound that features guitar tones that are carefully tuned to resemble that of Tony Iommi and Jimmy Page, while giving the music a quality that already feels classic.

The second half of Animal Noises is led by an alternative mix of “You Ain’t Going Nowhere” a track that originally was released on Here Lies Man and took a faster pace with a harder edge. The Chico Man Remix, as featured on Animal Noises, is slowed down and gives more attention to some of the song’s more subtle tracks, including a soothing keyboard line and off beat chords on the guitar, giving the song a strong resemblance to reggae when it is stripped back in such a fashion. The album closes with an instrumental version of “Animal Noises” which continues to highlight Here Lies Man’s greatness as a band. Aside from being incredibly tight, the band’s song writing proves to be quite unique and beyond exciting.

While only four songs in length- and with really only two new tracks- Animal Noises is a thrilling release and a perfect entry point for new fans to get into their work. “Animal Noises” and “Sorrow Tears And Blood” are two flawless songs that are welcomed additions to the group’s repertoire and will leave you listening to their full length debut. In this sense, Animal Noises follows its purpose while also delivering two more tracks that, while not as exciting as the opening half of the EP, round out the release with material that is both entertaining and perfect for super-fans. Animal Noises is a record that is beyond enjoyable from a band that I cannot praise enough for their sheer ingenuity.

A passion for music has always been a part of Gerrod’s life. As a young boy, he was raised on a steady diet of the music from The Chili Peppers, Aerosmith, The Stones, Prince, and others from his mum. Raised in the GTA, Gerrod continued to foster his love for music by attending a wide range of concerts and learning the drums. His unapologetic passion for music has no bounds and has spread to a wide variety of styles, whether it be the 90’s rock that sound tracked his teenage years, the jazz he studied in university, or his newfound love for hip-hop. He recently received his bachelors in music and education from York University and is passionate about writing and reviewing good (and less than good) music. Gerrod is also the drummer and songwriter for a Toronto based rock & roll band, One In The Chamber.
RELATED ARTICLES
afrobeatalbum reviewshere lies man
7.0

by Andrew Marrocco on June 15, 2018
Here Lies Man You Will Know Nothing RidingEasy Records Following a debut that captured the positive attention of several critics and garnered a not insignificant following, [...]