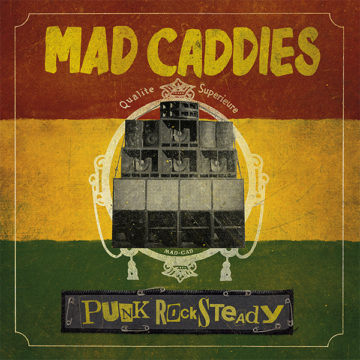 The Mad Caddies’ new album is the summer album we’ve all been waiting for. A compilation of punk rock classics played with a beachy reggae style, this album boasts a series of perfect tunes to rock out to poolside, hiding the music’s loud punk aggression behind a wall of slow, bopping rhythms and trumpet riffs. Punk Rocksteady is one of those rare cover albums which never comes close to matching the greatness of the originals, yet somehow is nevertheless wholly worth listening to. It seems intuitive that it was produced by Fat Mike of Fat Wreck Chords – guitarist Sascha Lazor claims it has “been one of his dream projects for a long time” – and equally unsurprising that the album, produced by Fat Wreck Chords, boasts a Fat Wreck chords-heavy tracklist – NOFX, Propaghandi, Lagwagon, Descendents, Tony Sly, Against Me!, Snuff. This album was intended as an outlet for non-punk fans to appreciate these punk classics through remaking them in an easy-listening reggae style, but feels more like an homage to Fat Wreck Chords’ legacy and their wacky, eccentric musical style.

At first glance, some songs on Punk Rocksteady seem specifically unlikely to smoothly transfer to reggae; take Bad Religion’s “Sorrow”, for example, a song with quick chord movements and unpredictable time signatures. The Mad Caddies’ rendition begins with a slow acoustic guitar overlaying drifting organ music, then fades into a disconcertingly clean reggae beat complete with blaring trumpets. The cover sucks all the raw catchiness and emotionality out of “Sorrow”, turning it instead into something mellow, conjuring images of hippies strumming guitars in a sunshine-laden park, crooning about world peace. Yet this setting is intuitive for “Sorrow”, woven from such lyrics as “when all soldiers lay their weapons down/when all kings and all queens relinquish their crowns”, and the cover’s musicality cleverly manifests the song’s message in a physical, more palpable way than the original.

Other tracks translate into reggae with an unsurprising ease. NOFX has commonly flirted with a ska repertoire – think “Eat the Meek” and “All Outta Angst” – and Mad Caddies’ reggae interpretation of the hit “She’s Gone” off White Trash, Two Heebs and a Bean is effortlessly fun, with interesting melodic twists and nuanced harmonies. “She” off Green Day’s Dookie is the album’s standout, with a natural groove that lends itself flawlessly to reggae. The covers of both “She” and “She’s Gone” offer the pleasant surprise of clarity, allowing the listener to appreciate Fat Mike’s and Billie Joe’s oddly poetic lyricism in a way the originals refuse to. The music sometimes adopts a strangely modern feel, with pop-sounding guitars in the last chorus of “She’s Gone” and rap verses interspersed into Operation Ivy’s “Sleep Long”.

The cover of Propaghandi’s “And We Thought Nation States Were a Bad Idea” is a fast-paced ska rendition, perhaps an ode to the band’s alleged low opinion of ska – think How to Clean Everything’s “Ska Sucks”. Nevertheless, Prophaghandi’s music translates into ska excellently, with whining pop-punk lead vocals, trumpet riffs trickling in, and heavy guitar interludes. An album of punk classics remade with a reggae twist is something that seems both absurd and inevitable, and Punk Rocksteady delivers, repackaging the heavy punk jams you grew up on into oddly delightful summery reggae beats.

Isabel is an English major at the University of Toronto, and spends most of her time reading books, listening to punk rock music, and writing for anyone and everyone willing to read it. Raised in Toronto, her somewhat eclectic music taste has been shaped by a healthy mixture of mosh pits and Mirvish musicals. She thinks live music is the highest form of entertainment.
RELATED ARTICLES
album reviewalbum reviewsfat wreck chords
10