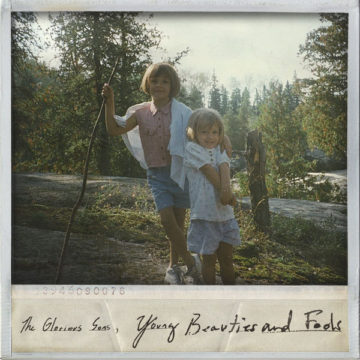 The stories that come out on The Glorious Sons’ new album Young Beauties and Fools are independent in their own right but when tied together in a hastily wrapped package, make up the sound of genuine rock n’ roll. Over ten tight tracks, The Glorious Sons recount nights of hard partying followed by the hangover aftermath.  Relatable and catchy, the album is an easy listen with a whole lot of heart.

The epitome of the album comes on opening track “My Poor Heart”. Simple piano chords and lead singer Brett Emmons’s abrasive vocals ring in the start of this track with a tinge of sadness but before long, the classic sounds of The Glorious Sons’ guitar mixed with emphatic horns brings strength to the song. The vocals on this track soon turn towards that of a preacher shouting, “I need to rest my poor heart! I need a cool glass of water and a place to fall apart!”  These lyrics point to that tinge of depression everyone feels after a night of heavy drinking and hard partying.

The songs on this album show a true shift in the band’s sound. While not losing touch with the sound that made them popular on 2014’s The Union, this album is less nostalgic and more polished. Single “Everything is Alright” points to this idea with a chorus of vocals that lend themselves to the pop side of life. Similarly “Come on Over” features a synthesized sound that one wouldn’t have heard on the band’s first album.  However, the contrast of this new sound against the always-gritty vocals shows that the band hasn’t lost touch with their roots.

“Godless, Graceless and Young” is a real gem on the album.  Coming around the middle of the album, this track is a welcome pick-me-up rock song with clever guitar licks mixed with a sound that reminds one of Republica’s “Ready to Go”. The moody sounding verses mixed with an upbeat chorus on this song make for a solid feel-good track.

While most stories come from a first-person perspective, tracks “My Blood” and “Josie” tell the stories of others in a delightfully small town way, recounting shenanigans, arrests and more.  The listener will enjoy this peak behind a curtain of somebody else’s life.

The album closes off in a stripped-down, bluesy way. Full of regrets and heartbreak, “Thank You for Saying Goodbye”, is simple, beautiful and lyrically sound.  Emmons sings out “All them dirty things make me think that love is a lot like hate.”  This song is a fantastic finish to a solid rock album.  More serious than the other tracks, “Thank You For Saying Goodbye” is perhaps the most honest and genuine track on this album.

Gabrielle Mueller is a lover of all things music, writing and charcuterie boards. Gabrielle has a particular passion for music of the 1960s and the hippie movement in Toronto’s Yorkville district. Gabrielle runs her own music website, The Hippie Historian, where she reviews concerts, interviews musicians and writes about music history that spans the ages.
RELATED ARTICLES
album reviewsblack box musiceverything is alright
8.0