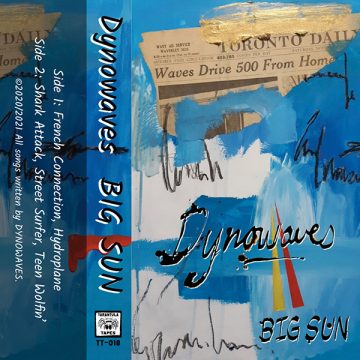 Reminiscent of a simpler time – and a warmer coast – Dynowaves released their debut studio EP, Big Sun, in 2020. They have now partnered with Tarantula Tapes for a limited run of cassette. Hailing from the unlikely Sault Ste. Marie, Ontario, which boards on the surf-free coast of Lake Superior, the instrumental surf rock duo of J. Childs and Jamie Vincent deliver big on the vintage tone and aesthetic, ultimately bringing the style that was big over 60 years ago into a fresh new light.

Big Wave opens with the near cinematic vibes of “French Connection”, a song that opens with a massive buildup before diving headfirst into a melodically weaving verse. What immediately makes “French Connection” standout is not only its dynamics, but its subtle ferocity, something almost entirely absent from the surf rock as a whole. This is only furthered in the fuzz and wah-laden guitar tones of “Hydroplane”, the longest track on the album. Not only does this song employ a strong sense of songwriting that sees its simple themes slowly develop throughout its length, it features some incredible guitar playing, particularly the solo sections which separate the reoccurring musical theme, making “Hydroplane” the strongest track on the album.

With three songs remaining, Dynowaves ensure that their modern surf rock sound is genuine rather than a novelty. The bass-heavy “Shark Attack” captures a sense of dread through its harmonic dissonance and biting guitar solos, while “Street Surfer” takes on the popular tremolo guitar style synonymous with the genre and outfits it with a dangerous and jarring breakdown. The contrast hits like a sledgehammer to the side of the head. Big Sun comes to a close with the softer tone of “Teen Wolfin’”. The track, while far more conventional than the rest of the EP, is yet another example of how Dynowaves has brought surf rock into the 2020’s with a slightly grungy yet modern indie rock vibe that hangs in the air.

All in all, Big Sun is a strong debut from Dynowaves. It is rare to find new surf rock that strives to push beyond being simply a generic throwback. Rather than fall flat, Big Sun is an exciting breath of fresh air for Dynowaves and the entire genre that thrives through dynamic songwriting and a cross between modern and distinctly vintage tones to make for a truly unique release.