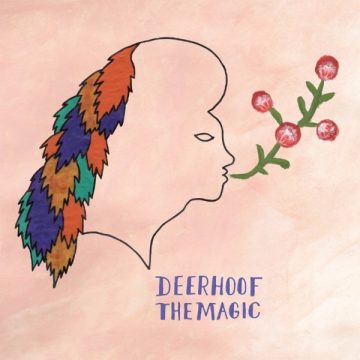 A surreal San Francisco treat since 1994!

Zany. Weird. Bizarre. Unorthodox. Quirky. Supernatural. Absurdist. Unconventional. This is the spectrum of diction that fans and newcomers would use to describe the special gift that is Deerhoof. With the grueling, seditious heavy fuzzy guitars, unremitting drumming, and sometimes pell-mell vocals, listeners are treated to something more than the sum of these parts of a whole while other less discernable eavesdroppers might consider this album harsh, sonic explosive diarrhea.

In this day and age, it’s hard to find musical acts that have stayed true to their vision while self-producing and self-managing their own brand, but experimental rock band Deerhoof is one of those rare breeds that have done it and kudos needs to rightfully be given to them and placed at their divine feet.

Deerhoof’s non-adherence to structure definitely keeps their songs fresh on this album and after 20 years, it’s amazing that this band still has anything left in the tank. Satomi Matsuzaki’s unique vocals (thrilling yet uncomfortable at times) do not distract from the instrumentals and hold up to close scrutiny. You won’t find this setlist playing on top 40 stations much, but there are great moments throughout this album for the super-fans. The track list starts with my favourite “The Devil and his Anarchic Surrealist Retinue” (shout out to Alex Ross, anyone? Yes, you’re allowed to use Google, unread hipsters!), as we are treated to an aurally interesting song that evokes sonic anarchy and surrealism with the use of high-pitched guitar. Greg Saunier’s drumming chops are on full display in this song and thankfully continue throughout the album. The song then morphs as there’s a sudden break in the middle of the song, cutting into a slower beat. Matsuzaki’s high-pitched vocals float the song along to a satisfying conclusion. Great start to the album! In “Kafe Mania!” we glean from the lyrics an homage to espresso beverages. For those looking for an imitation of a great garage band song, look no further than “That Ain’t No Life to Me,” as Matsuzaki waxes poetic over guitar power chords. “Life is Suffering” does not suffer from a great drum opening that is juxtaposed with a welcomed outro. Synths continue to be back in style as shown on “Criminals of the Dream,” while funk abounds in “Model Behavior” and “Debut,” as they try their best to be a Frank Zappa-esque wet dream. “I Don’t Want to Set the World on Fire” (it just ends abruptly??) and “Patrasche Come Back” were uncomfortable listening, but that’s to be expected from Deerhoof. My second-favourite track “Nurse Me” is another sonically interesting earworm with changes of tempo coupled with Matsuzaki’s simple utterances, which makes for a languid, drug-induced journey into the realm of senses. Who knew going to the hospital could be so trippy? Be on the lookout for the awesome frantic ending. As we near towards the end of the album, “Plastic Thrills” continues the energy with some nice guitar lines / hand clapping and whoo whoo-ing. I liked that Deerhoof eased off the gas to slow it down near the end of the album with the track “Little Hollywood” to give the listeners a bit of a break. A nice contrast.

This unstable (in a great way) collection of multiple shifting genres (elements of Punk, Pop, Glam, hair Metal, Doo-Wop, Hip-Hop, and R&B) within the album is a wonderful mixed bag of fuzzy guitar ear candy for those of you who want something different. Deerhoof challenges your listening ability by veering off point A to point C, then finishing at point B while throwing off the usual basic melodic song structures that one may have gotten used to ad nauseam. With bandmates John Dieterich, Satomi Matsuzaki, Ed Rodriguez and Greg Saunier leading the charge on this album, it’s incredible that this was all done within one week – that is extraordinary in this day and age.

Deerhoof, you’re still weird and unique. We continue to like you a lot more as you have added another magical gem to your canon.

Insert pretentious stuff about me here. I was born at a very young age. I am pretty, funny... without the comma. Easily distracte
RELATED ARTICLES
deerhoofpolyvinyl recordsthe magic!
8.0

by Michelle La on May 29, 2020
Deerhoof Future Teenage Cave Artists Joyful Noise Recordings As music fans, we demand progress from our favourite artists. With each successful album, we expect bigger and [...]

by Joel Weatherly on November 25, 2016
Various Artists Polyvinyl Plays Polyvinyl Polyvinyl Records Over the past 20 years, the independent music scene has changed significantly. Bands have come and gone and [...]