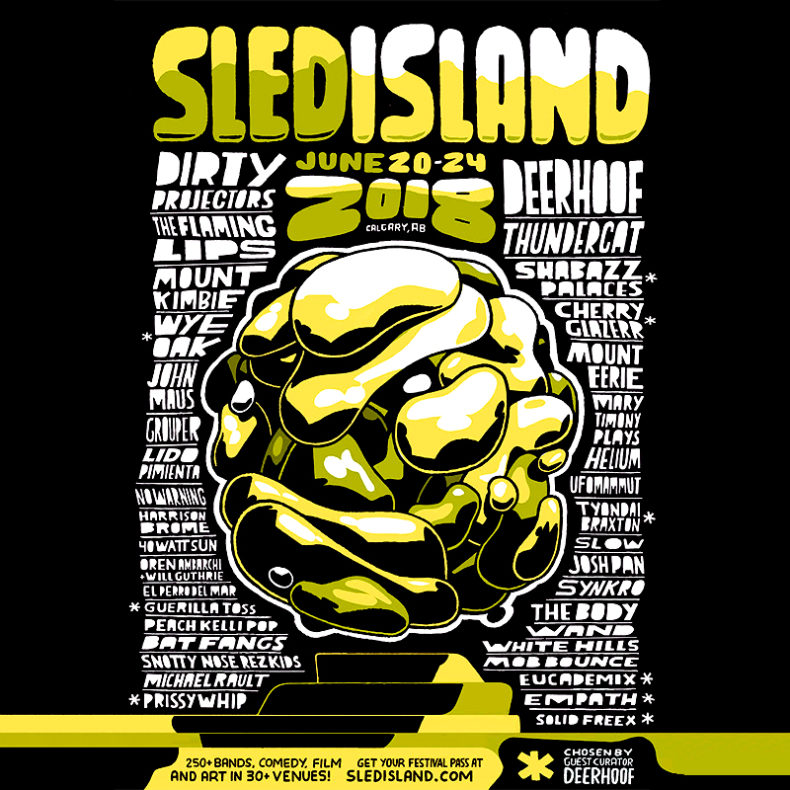 Sled Island carries an eclectic load. The Calgary based music festival has grown to become one of Canada’s most notable and peculiar music festivals. Now celebrating its ninth year, the city of Calgary has fully embraced the event as one of it’s premier showcases of artistic culture, not only for the prairie provinces but for all of western Canada.

Built around a SXSW (or NXNE!) urban multi-venue format, Sled Island takes over much of Calgary’s downtown core for almost a week of non-stop music, visual art and community-oriented activities. For a downtown venue oriented music festival, Sled Island offers accessibility that festivals in Vancouver and Toronto can only dream about. Cowtown’s downtown core includes a large number of respectable and interesting musical venues with several of the establishments hosting dual stages. Palomino, the Dickens, Broken City and Legion #1 all serve as hardworking music dives. Many of the venues even include dual stages allowing for a more varied and adventurous festival experience.

Calgary, the most socially conservative major city in Canada, packs a surprisingly heavy artistic punch. Sled Island is not only one of the premier showcases in western Canada country for young up and coming folk, rock, pop and electronic artists but also includes an annual guest curator, a process which has brought unusually artistic results. Sled Island’s surprisingly impressive avant-garde artist selections are one of the festival’s most compelling aspects. 2018’s guest curators, the eclectic and progressive San Francisco based group Deerhoof, organized a sonic spread that did not skimp on music of the imaginative, minimalist or eclectic variety. Sled Island’s shift from major outside venues such as Olympic Park proved to be well founded as Calgary’s notoriously unpredictable weather would have hampered the festival.

Festival headliners the Flaming Lips bombarded an audience at the University of Calgary with their highly renowned, visually overpowering live performance show. Mahogany Frog, a spaced out four piece played a half hour of thick analogue synth tones and progressive instrumentals in perfect tone with the impending Flaming Lips, who champion weird things in all of their glory.  Supported by confetti cannons, giant balloons, laser beams and an intense, always moving video screens, it is not a stretch to say that the Flaming Lips, with their gigantic, customized lighting rigs, fog-powered giant balloons, lasers play one of the most incredible rock and roll shows on the planet. From the opening notes of “Race For the Prize” a high spirited crowd continued dancing after the show until being ushered out by security.

On Friday, Calgarians were lined up at the door to attend a showcase at Studio Bell, a giant building with beautiful curved architecture dedicated as Canada’s national musical centre. Housing the world’s largest collection of synthesizers, Studio Bell also made a luscious and ornate setting for Sled Island’s most ambient artists such as Portland based Grouper; rarely does a setting pay such respect to such low-key musical ambience. Performing solo to a sold-out, extremely quiet and respectful audience, Grouper delivered a set of highly ornate soundscapes.

Festival curators Deerhoof, once humble Sled Island artists, played a jam-packed show at Legion #1 in the Calgary downtown core. With the hall tables stacked and pushed to the side of the room, Alberta music fans were evidently out in numbers as the show reached its capacity before the evening’s headliner. Deerhoof executed a passionate set that did not differ largely from their largely lauded Live in Japan album and broke out hits like “Girls” early on in their set. Deerhoof are a band that brilliantly blends the worlds of the avant-garde and pop music.

By the time Los Angeles based rock outfit Wand took the stage, the stage had been well primed with edgy Canadian rock and roll. Crushing into the thick riff, guitarist/vocalist Corey Hanson led Wand through a vivid cover of “Cinnamon Girl” and no doubt converted a few Albertan Crazy Horse fans with their loving homage to Neil Young, a great Canadian rocker.  Hanson’s guitar work and melodic shifts were especially enticing in the ultra packed, completely sold out Broken City downstairs.

Sled Island offers an intriguing, original festival experience that is embraced by the city and province with a particular light on the substantial prairie musical talent. Sled Island has picked up speed to become one of the most interesting and distinct festivals in Western Canada. Everyone can expect a good time during sled-season.

The Spill Magazine is a Toronto-based online publication dedicated to covering the independent music scene with a strong focus on our thriving hometown talent. Our writers bring you up-to-date news, in-depth features on musicians and reviews for the latest CD releases. We also travel to the front lines for all local festivals including Canadian Music Week and North by Northeast. Don’t forget to check out our Facebook and Twitter pages for all daily Spill updates.
RELATED ARTICLES
calgarydeerhooffestival

by Liam Prost on September 12, 2022
PROPAGANDHI w/ NO MORE MOMENTS @ THE PALACE THEATRE, CALGARY SEPTEMBER 12, 2022 Coming off a set of prairie dates with legendary Canadian politico-punks Propagandhi, this last show in Calgary at the downtown Palace Theatre is a bit of a [...]

by Synescape on July 28, 2017
Terminus: Impact 2017 | #terminusfestival @ Dicken’s Pub, Calgary July 28-30, 2017 Industrial summer camp take two: the dust is just starting to settle on Calgary after the explosive dark electronic music festival that has become a [...]

by SPILL NEWS on January 19, 2017
CONTEST CLOSED   WE ARE GIVING AWAY A PAIR OF TICKETS TO AN ARKELLS CONCERT IN YOUR HOMETOWN ON THEIR UPCOMING CANADIAN TOUR! SEE DATES BELOW   1 PAIR OF TICKETS TO BE WON!   SUBSCRIBE TO THE OFFICIAL SPILL MAGAZINE NEWSLETTER BELOW FOR A [...]
6.0