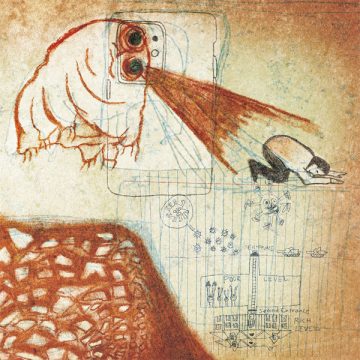 As music fans, we demand progress from our favourite artists. With each successful album, we expect bigger and better. Experimental band Deerhoof has remarkably put out its 15th studio album, Future Teenage Cave Artists, and refuses to kowtow to these demands.

Deerhoof is one of the most vibrant bands to emerge from San Francisco’s ’90s indie rock scene, and the group has continually evolved its disjointed sound. Its previous LP, 2017’s Mountain Moves was the pinnacle of their progress, featuring polished production, guest appearances, and even sing-along lyrics. On Mountain Moves, bigger was better and produced the band’s most approachable release yet.

But on Future Teenage Cave Artists, the band takes a different course. Gone is the shiny studio sound. Instead the band recorded many of the instruments through a laptop microphone. Gone are the guest rap appearances from stars like Awkwafina. Instead, tracks like “New Orphan Asylum For Spirited Deerchildren” lean into Satomi Matsuzaki’s irreverent vocals, with lyrics asking “Why would you shoot my Bambis?”. The result is a jaggedness that will give new listeners a hard tim, yet longtime fans will cherish this difficulty. It delivers an off-kilter and improvised playfulness, reminiscent of their early albums. Bigger may be better, but Future Teenage Cave Artists serves a wonderful reminder: there’s magic to be found when you instead go back to basics.

Michelle La is a freelance writer based in Melbourne, Australia. She is the Editor of Cat Brain Land, a music blog that loves new and alternative music from Asia and Australia.
RELATED ARTICLES
album reviewalbum reviewsdeerhoof
8.0