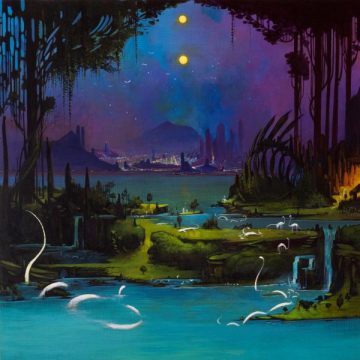 With The Big Wave Tour coming to a close, having taken the band throughout Ontario and Quebec, Crown Lands has released Odyssey Vol. 1. The live album was recorded as a live-streamed concert experience, in partnership with Louder Sound, that aired in November. Ultimately, Odyssey Vol. 1 is a live celebration of their recent creative output, alongside old favourites, and establishes the duo as Canada’s most promising up and coming rock outfit.

Opening with the instrumental track, “Inner Light”, Crown Lands kick off Odyssey Vol. 1 with a building energy that grows from an intricate, fingerpicked acoustic melody, accented by the percussive tapping of a tabla before diving headfirst into a wave of distortion which leads into a ‘70s progressive rock-inspired passage. Few could create such a dynamic instrumental track that remains engaging the whole way through and fewer could successfully open a rock show in such a manner, yet Crown Lands have done so successfully. Without warning, “Right Way Back” propels their set into high gear with a hard-hitting and energizing performance.

As with their most recent releases, Context: Fearless Pt. I and White Buffalo, both released this year, Crown Lands have truly begun to flex their progressive rock influences in full force. Odyssey Vol. 1 demonstrates Kevin Comeau and Cody Bowles’ collective and individual proficiency on their instruments and the organic chemistry that sets off when the two take the stage. Songs like “Context: Fearless Pt. I”, “White Buffalo”, and the monumental album closer, “The Oracle” are prime examples of this. Additional highlights include the bluesy sludge rocker, “Mountain” and the “Stairway To Heaven” inspired “Sun Dance”, which is a stunning vocal showcase for Bowles, who sounds like a modern Jeff Buckley. Of course, the near 15-mins closer, “The Oracle”, is a spectacle all on its own. The song opens with lush synth and Bowles’ hauntingly beautiful vocals before Comeau comes in with an intense guitar riff, reminiscent of Zeppelin’s “No Quarter”, that cuts through the soft soundscape. The song is accented by ripping lead lines, shifting pulses and dynamics, complex rhythms, impressively seamless transitions, and a killer guitar solo.

Odyssey Vol. 1 acts as a perfect sample of Crown Land’s current live show. For those who could not catch them on The Big Wave Tour, their latest live release should both satisfy your desire to see them, while also sparking a level of unparalleled excitement and hype for what is to come from the band in the coming year. Showing no signs of slowing down, Crown Lands continue to raise the bar for rock bands across the board with Odyssey Vol. 1.

A passion for music has always been a part of Gerrod’s life. As a young boy, he was raised on a steady diet of the music from The Chili Peppers, Aerosmith, The Stones, Prince, and others from his mum. Raised in the GTA, Gerrod continued to foster his love for music by attending a wide range of concerts and learning the drums. His unapologetic passion for music has no bounds and has spread to a wide variety of styles, whether it be the 90’s rock that sound tracked his teenage years, the jazz he studied in university, or his newfound love for hip-hop. He recently received his bachelors in music and education from York University and is passionate about writing and reviewing good (and less than good) music. Gerrod is also the drummer and songwriter for a Toronto based rock & roll band, One In The Chamber.
RELATED ARTICLES
album reviewalbum reviewscrown lands
9.0