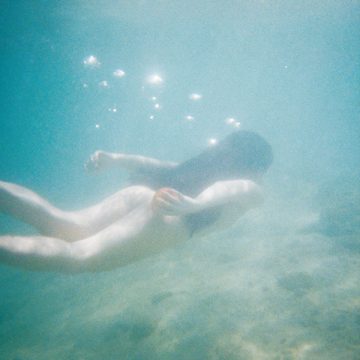 There is a lot going on in Ichiko Aoba’s music. Born and raised in Japan, Aoba has built a significant career in her homeland. Originally a folk artist, Aoba has taken her guitar and added a great many layers. Imagine David Sylvian working with The Cocteau Twins creating a soundtrack for a Studio Ghibli film and you get the idea. Actually Studio Ghibli films are noted as a major influence on Aoba’s music. And it comes through loud and clear, or rather quietly and clear. This album is a sublime creation full of surprises, strong melodies and beautiful production.

Windswept Adan is Aoba’s seventh album, and on this one she is working with pianist/composer Taro Umebayashi (who is known under his pseudonym Milk). The combination of her guitar and his piano is perfect and together they have created a brilliant albu. Aoba has said it is the soundtrack for a fictional film, and this is an apt description of this music. Together, the two artists mix jazz, folk, and classical to create extremely moving and beautiful music.

Although Windswept Adan has many instrumentals, it is when she sings that time seems to stand still. She has a beautiful voice, and on songs like “Chi no Kaze”, where she accompanies herself on guitar and layered vocals, it is angelic. It is pure, and it is stunningly beautiful. It is gentle and she sounds somewhat vulnerable as she sings, but this adds to the overall feeling and depth of the album and performance.

The album is pure teamwork. Each of the two get their moment to shine, although they clearly help each other and it is a true partnership. A good example is  “Parfum d’etoiles”. This is Umebayashi playing piano and is a song he wrote. Aoba hums and whistles as Umebayashi plays the piano. It  is heartwarming and absolutely brilliant. It is a beautiful and human song. She invites the listener in as she creates and it is a wonderful way to spend three minutes.

The album concludes with the exquisite “Adan no Shima no Tanjyosai”, like the final scene in a movie. Again, emotions ride high and the use of strings is a wise decision as the arrangement adds to much to the song. It is the perfect way to end the album, perhaps the only way.

Although she has released many albums in her native Japan, Windswept Adan is her first to be released in North America. Perhaps this continent is finally ready for her music, or perhaps she has simply been building an audience as fans have been importing her albums for years. Whatever the reason, this is a welcome album and should gain her new fans. This is minimalistic and melodic music at its finest.

Born and raised in Whitby, Aaron discovered music through his love of The Beatles. This led to a career in radio, writing for various publications, and ultimately a radio show about The Beatles (Beatles Universe), which ran for over four years. When not immersed in music, Aaron enjoys spending time with the loves of his life -- his wife Andrea, and daughters Emily and Linda (all of whom have an intense love of music too).
RELATED ARTICLES
album reviewalbum reviewsba da bing records
7.0