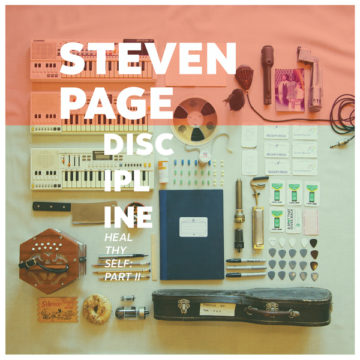 Steven Page is one of those musicians who walks the line between “entertainer” and “artist”. A self-described record nerd who cut his teeth on pop music, and achieved some of his greatest fame co-fronting and writing for Barenaked Ladies, Page comes by both of those titles honestly. Comfortable wearing not only the hats of the entertainer/artist, Page also dons a variety of chapeaux, when presenting his music.

Most specifically, the term “activist” comes to mind when considering certain tracks on Steven Page’s latest album, Discipline: Heal Thyself, Pt. II. Created as a companion piece to 2016’s Heal Thyself, Pt. I: Instinct, many of the songs on Pt. II come from the same cycle of work which spawned Page’s previous album. Though there was thought of releasing all of the songs on a double album back in 2016, Page noted in a recent Spill Magazine interview, “It was thirty songs. A: It seems a little self-indulgent. B: It seems presumptuous that I would think that an audience would want, or have the time to spend listening to me. The other option was that they would get the record, and skim it. I worked really hard on it and I am proud of it, so I don’t want that to happen. And I also just didn’t want to make people think that they have to.”

Musically and stylistically diverse, layered and intricate, this album presents many delightful gifts to the listener. An obvious standout is the single, “White Noise”, a modern day protest song which takes aim at Donald Trump and his ilk. This song has Page reflecting on his situation as an outsider in America, and urging the listener to resist against the privileged classes.

Song after song, Page demonstrates superb songwriting and amazing pop sensibilities, supported by strong arrangements and production. One can’t help but smile when certain instruments surprisingly emerge, or when subtle homage is paid to earlier bands or musical forms. This album is for everyone: BNL fans, Steven Page fans, pop music fans. Music for the masses delivered by that unmistakeable tenor voice. You need to hear this.

Musician, writer, and grandad Bryan Williston is a fan of music in all of its forms. He loves to listen to, play, and talk about music, and to share his ideas with others. Despite the failings of humans, he is hopeful about the future, and thinks that Spill Magazine readers are just the best. Bryan lives in Whitby with an assortment of people and dogs.
RELATED ARTICLES
album reviewalbum reviewsbarenaked ladies
8.0