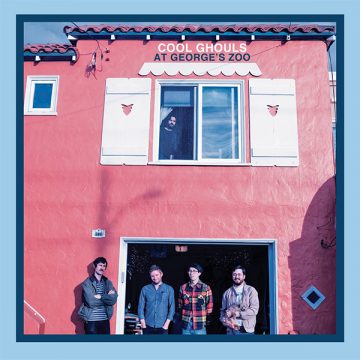 Beloved San Francisco psychedelic rock-quartet Cool Ghouls have released their new 15-track album, At George’s Zoo, in which they wear their influences proudly on their sleeves, successfully distilling a certain retro San Francisco musical vibe and reimagining it for the 21st century.

Opening track “It’s Over” is reminiscent of a band like The Association in the way the band harmonizes, as they sing “It’s the beginning of a new wave” in a way that sounds like it was built from the second-hand pot smoke of “The Age of Aquarius”. Not to mention the perfect use of a horn to give the song some bonus flair. “Smoke & Fire” is an Allman Brotheresque ripper until the harmonized quartet of voices comes in again and reminds you this isn’t the Allman Brothers. Long guitar solos from another time period ensue.

There is variety here, too, and not every song channels the same influences. For instance, “Land Song” is a slower track featuring some gentle flutes and strings and eschews the harmonization of the opening songs for a more solo go at it that calls to mind the less psychedelic side of the music coming out of Laurel Canyon in the 1970s. While there are a few songs that are less distinctive, “The Way I Made You Cry” utilizes a nice piano and horn section that calls to mind other bands like Chicago or Steely Dan. Late in the album is “Surfboard” which is the most Beach Boyesque track, even including a little background “WooOOOooo” that feels like a direct nod to the sort of boppy surf rock the Beach Boys specialized in during the mid-1960s.

Overall, I can appreciate the appeal of this album, which very much feels like an artifact from another period of rock music long past. It’s often said that imitation is the sincerest form of flattery, and the Cool Ghouls have really pinned down the various sounds of the aforementioned bands to create something all their own. It’s all the more remarkable that it’s being made now, and feels like a sincere attempt to preserve a form of music that is increasingly hard to find any more in an up-and-coming band. In that way, At George’s Zoo is an ode to the past that brings it back into the present again, and in that way it definitely delivers.

Dan Kennard is an English teacher and fiction writer living outside Kansas City, Kansas where he lives with his wife and children. More about his work can be found at amazon.com/author/dankennard. You can also follow him on Twitter and Instagram @kennardistry or contact him at kennardistry@gmail.com.
RELATED ARTICLES
album reviewalbum reviewsempty cellar records
7.0