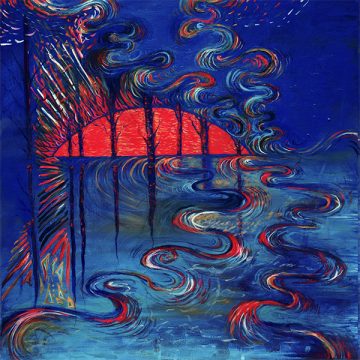 Toronto’s Cigar Club have been following their 2019 debut self-titled studio EP with a series of singles released throughout the first half of the year. The five singles – “Swimin’ In Gold”, “…Aliens”, “From A South East Asian Two Bedroom Condo”, “Like White Flats In Winter”, and, most recently, “COLD” – have culminated in the release of the band’s first full-length album, Day, Now, a record that certainly establishes Cigar Club as one of Ontario’s premier alternative rock bands.

Opening with the feedback-driven and atmospheric “Vessel”, Day, Now opens with a cinematic and thematic vibe that questions the existence of our reality – think if you were awakened from the Matrix via an alien abduction. The album truly kicks off with the aptly titled “…Aliens”, the fast-paced and riff-heavy single that feels nostalgic for early Queens Of The Stone Age, as well as modern indie rock artists of the likes of Cage The Elephant. This is the sound Cigar Club call home, a tone that is palatable with modern indie rock, but is not afraid to splash a sense of reckless abandon on their songs to create a sense of danger that is all too often absent from indie rock as a whole.

Songs like “Swimmin’ In Gold” and “Like White Flats In Winter” demonstrate this best. The former is a hard-hitting banger that could have been pulled straight from Josh Homme’s songbook while flexing some slick lead guitar lines, while the latter is a haunting alternative ballad that erupts into a chaos as the song builds towards the climatic close. “COLD” acts as an extension to “Like White Flats In Winter”, building on the same tones and breaking from the melancholic arpeggiated guitar in the verse with an unbridled use of rhythmic distortion. An additional highlight is the energetic sway of “Parable Of The Sea Dogs”.

If anything is clear, Cigar Club revel in the chaos set up through their dynamic songwriting and performance. Day, Now proves this time and time again through the course of its nine tracks. The contrast between soft and heavy is not only felt between different songs but is often found seamlessly within each track as the band organically ebbs and flows from verse to chorus; ambient to distorted; peaceful to conflicted. This is not only a matter of songwriting, but also performance as the band balances tasteful restraint with visceral indulgence which makes for an emotive performance. It is because of this raw energy, combined with a modern style, that makes Cigar Club so unique and different from most indie and alternative rock bands of today.

A passion for music has always been a part of Gerrod’s life. As a young boy, he was raised on a steady diet of the music from The Chili Peppers, Aerosmith, The Stones, Prince, and others from his mum. Raised in the GTA, Gerrod continued to foster his love for music by attending a wide range of concerts and learning the drums. His unapologetic passion for music has no bounds and has spread to a wide variety of styles, whether it be the 90’s rock that sound tracked his teenage years, the jazz he studied in university, or his newfound love for hip-hop. He recently received his bachelors in music and education from York University and is passionate about writing and reviewing good (and less than good) music. Gerrod is also the drummer and songwriter for a Toronto based rock & roll band, One In The Chamber.
RELATED ARTICLES
album reviewalbum reviewscigar club
9.0

by Aaron Badgley on October 15, 2021
Robin Guthrie Mockingbird Love Soleil Après Minuit The Cocteau Twins called it a day in 1997, since then, Robin Guthrie has been very busy carving out his own distinct solo career. [...]
8.0