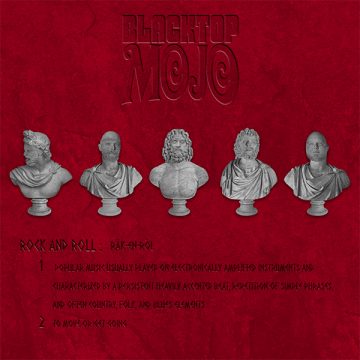 Next to Dirty Honey, Blacktop Mojo may very well be America’s biggest independent rock band. Returning with their fourth full length album, Blacktop Mojo follows their 2020 EP, Static. Most noteworthy, however, is that the eponymous record is, by far, their biggest and best release yet.

Opening with the riff heavy and hard hitting rocker, “Wicked Woman”, Blacktop Mojo sound like larger than life rock gods. The band sounds massive and the guitars crunching all under Matt James’ incredibly powerful vocals. The energetic song ups the ante with an explosive chorus and a fiery dual guitar solo ripped at breakneck speeds. Just when you think Blacktop Mojo couldn’t get bigger, they double down and follow “Wicked Woman” with “Bed Tundy”, a haunting and hard-hitting track that’s guitar lead lines – and yet another jaw-dropping solo – are accented by lush Alice In Chains inspired backing vocals, making for an intense listening experience about the infamous serial killer. With this pair of songs, Blacktop Mojo kick down the doors – and any doubts people may have about them – with two of the best songs the album has to offer.

Blacktop Mojo is a record that indulges in classic rock riffs, ‘90s grungy vibes, and modern rock tones. It is because of this that the band have only grown with every release, and their self-titled is no different as it only benefits from how the band continues to push the stylistic boundaries, and their own performance, across 12 tracks. While the middle section may suffer from too many slower, 2000s inspired rock tracks, there are a number of highlights beyond the opening two songs. The flamenco acoustic ballad, “Make Believe (Interlude)” is bound to turn heads, just as the sinister riff and gospel backing vocals of “Do It For The Money” is to get the blood pumping. Furthermore, the sludgy “Stratus Melancholia” sounds as if it was pulled straight from the Alice In Chains songbook and features yet another showstopping vocal performance from James.

Blacktop Mojo sounds like the record the band has strived to make since their 2014 debut. It is clear as to why they chose to make this collection of songs their self-titled album, it is, after all, the perfect sonic picture of the Blacktop Mojo sound. With songs like “Wicked Woman”, “Bed Tundy”, and “Do It For The Money”, the band has raised the benchmark for up-and-coming rock bands, along with themselves, making Blacktop Mojo a must hear rock record of 2021. With big guitars and even bigger vocals, Blacktop Mojo firmly establish themselves as one of the strongest up-and-coming rock bands out there now with Blacktop Mojo.