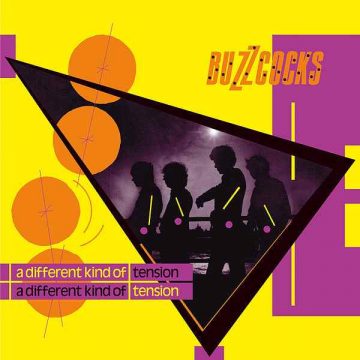 Few albums have achieved such iconic status as A Different Kind Of Tension. Produced by Martin Rushent, A Different Kind Of Tension was Buzzcocks’ third and final album prior to their reunion in 1993. The lineup for this album is arguably the classic Buzzcocks one, featuring Pete Shelley (vocals, guitar, keyboards), Steve Diggle (guitar, vocals), Steve Garvey (bass, vocals), and Johnny Maher (drums, vocals). Originally released in 1979, the album has been rereleased several times in several configurations featuring bonus tracks. For this rerelease, Domino Records has gone back to the original 12 tracks and done a fantastic job of recreating the album as it was originally released.

It was a brilliant decision to leave off bonus tracks. In re-releases of compilations, bonus tracks are acceptable, but adding (or subtracting) any songs from an album such as A Different Kind Of Tension is akin to tearing pages out of a Dickens novel. This is how Buzzcocks intended for the album to be heard.

It kicks off with the revealing opening lines of the tremendous “Paradise:” “Where in the world are we? / Everything’s fake, nothing’s real / I guess it just depends on how you feel.” This sets the standard and the direction for the album.

Musically, this is mature punk with the lyrics to match. Shelley and Diggle exchange guitar licks throughout the album almost as a dialogue. With the exception of three songs, Shelley wrote the entire album, which reflects a great deal about the artist and how, in many ways, this is a deeply personal album. Themes he would revisit in his solo career pop up throughout. Diggle’s contributions are equally as strong, but Shelley has the gift of humour as well as the ability to turn a phrase.

“I Believe” is a manifesto of sorts and deeply disturbing at times – especially with the ending mantra of “there is no love in this world anymore.” But at the same time, Shelley demonstrates his humour with the lines: “And I believe I’m going to be late / So I’ll be leavin’, what I believe in.”

A Different Kind Of Tension is a brilliant album, certainly one of the best punk albums of all time. It serves as a framework for many other bands and for the genre in general, although it’s arguable that Buzzcocks had left punk far behind by this stage in the game. The album is full of diverse sounds in addition to being well-produced and extremely well-played.

Born and raised in Whitby, Aaron discovered music through his love of The Beatles. This led to a career in radio, writing for various publications, and ultimately a radio show about The Beatles (Beatles Universe), which ran for over four years. When not immersed in music, Aaron enjoys spending time with the loves of his life -- his wife Andrea, and daughters Emily and Linda (all of whom have an intense love of music too).
RELATED ARTICLES
album reviewalbum reviewsbuzzcocks
9.0