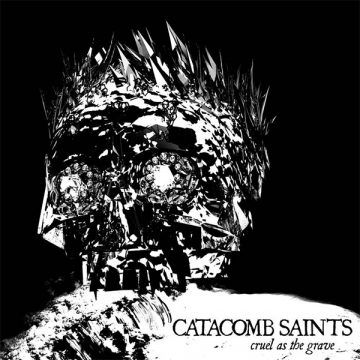 Befittingly self-described as “elevator music for the end of the world”, Catacomb Saints kick things off with their first EP, Cruel As The Grave, entrenching listeners in lyrical hopelessness and reverberating synth. Composed mid-winter in a dark cave in the Canadian Rockies, the collaboration of folk singer Neil Holyoak (of the band Holy Oak) and experimental musician Devon Beggs (also known as Dream Hair) looks to convey to listeners the cave’s echoing acoustics, imitating the natural sonic landscape through synthonic riffs and haunting vocals.

The album takes listeners into a transient world, embedding stylistically tranquil guitar into each track and mixing it with lyrics that are both existential and poetic. The second track “Green Lady” does this seamlessly, with a synthesized melody that instantly hooks you into the song, guiding through the hypnotizing chant of meaninglessness from the vocals.

“Shanghai Grill” is another standout track from Cruel As The Grave. Playing out like the background of a depressing television news broadcast, the song ends the album perfectly as a nod to our present-day world trifles.

Vaguely reminiscent of Type O Negative, Cruel As The Grave is a folky take on doom, destruction and overall despair. I look forward to hearing more of the depressingly beautiful universe created by Catacomb Saints.

Raised on Don McLean and Zeppelin, Molly knew every word to “American Pie” before she could walk. A natural born writer and musician, Molly has worked in and out of the entertainment industry for almost a decade, from singing Italian opera to having managed an award-winning heavy metal radio station, and now working as a publicist for world changing companies around the globe. Molly graduated from Seton Hall University with a B.A. in Public Relations and currently lives in Jersey City with her lifelong sister soldier and her bug defeating cat Clementine.
RELATED ARTICLES
album reviewalbum reviewscatacomb saints
7.0