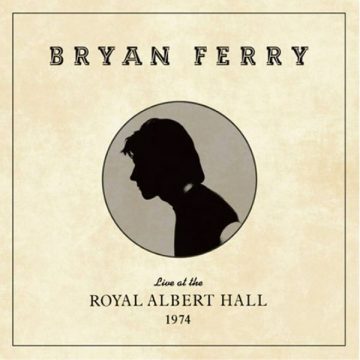 Times have changed. For the most part, today’s artists are not like the artists of the 1960s, 1970s and 1980s. I know, I sound like an old guy but it is true. Take Bryan Ferry, for example. In 1974 he released an album with Country Life with Roxy Music, as well as solo album Another Time, Another Place, released singles with Roxy Music and as a solo artist featuring non album cuts, toured with Roxy Music and completed his first solo tour, and nothing suffered. Both albums and all music he put out that year was brilliant and influential. Now, Ferry was not unique, in fact most of the artists of that time did the same — check out what David Bowie accomplished from 1972 to 1974. But, as I said, times have changed.

This is an interesting live album to release. It is not Ferry’s first live record but it is a very important historical artifact from his first solo tour. The tour was rather short, three dates, but it was significant in Ferry establishing a solo career. He is joined on stage by fellow Roxy Music members Phil Manzanera on guitar, drummer Paul Thompson, and bassist John Porter, with Martyn Ford acting as musical director. But the songs are all solo Ferry from his two first solo albums, These Foolish Things and Another Time, Another Place, with one Roxy Music song from Country Life, “A Really Good Time”.

Ferry, of course, provides piano and keyboards, and the end result is a very tight and wonderful performance from a remarkably talented group, and there are differences from the original studio releases. Listen to “Another Time, Another Place” for example. Manzanera’s guitar is blistering as Ferry reaches a fever pitch. It is quite remarkable.  The other interesting aspect is the number of cover versions. In fact the entire concert consists of covers. I will argue that the Roxy Music song is a cover as well as Ferry is performing it solo. “I Love How You Love Me”, “Don’t Worry Baby”, “It’s My Party”, “These Foolish Things”, and my personal favourite “A Hard Rain’s A-Gonna Fall” are where Ferry does the impossible by making others’ songs his own.

The production is excellent, given the time it was recorded and that it sat unreleased for 46 years. It sounds amazing and the balance is quite even.  This is an excellent snapshot of the beginning of Bryan Ferry becoming Bryan Ferry. Forget the historic significance, it is a great album. I am not sure what prompted this release, but I for one hope that it is the beginning of a series.

Born and raised in Whitby, Aaron discovered music through his love of The Beatles. This led to a career in radio, writing for various publications, and ultimately a radio show about The Beatles (Beatles Universe), which ran for over four years. When not immersed in music, Aaron enjoys spending time with the loves of his life -- his wife Andrea, and daughters Emily and Linda (all of whom have an intense love of music too).
RELATED ARTICLES
album reviewalbum reviewsanother time another place
8.0