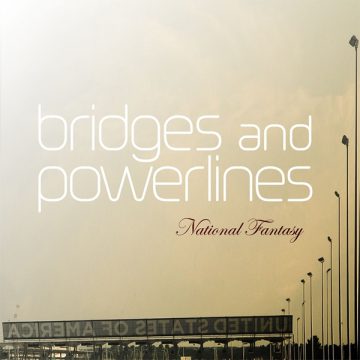 One of Brooklyn’s favourite Indie-Pop groups returns after two years in the studio, with its newest LP, National Fantasy. Bridges and Powerlines is a new-comer to the New York music scene, with its first EP being released 10 years ago now, back in 2006; however, it has had a particularly eventful past couple years. Building its own studio in a Harlem cellar, where the bulk of National Fantasy was recorded, as well as opening a successful live music venue in Brooklyn, the past two years have been busy to say the least. Bridges and Powerlines has definitely developed a recognizable sound for itself. Taking inspiration from genres such as Electronic, Indie-Rock, and New Wave, to develop its own unique brand of Dance-Rock.

Taking the group’s past work into consideration, National Fantasy isn’t exactly a significant development when it comes to aesthetics. The similar production and structure will surely satisfy all of the group’s fans who love their style and simply crave new material. If any fans, however, were expecting some new and exciting elements and growth, National Fantasy may not be the group’s most memorable release to date. It must be said, though, that this LP does really show us how Bridges and Powerlines has perfected its style, and it is quite a consistent piece of work from start to finish.

Bridges and Powerlines has become an expert at harmony, and weaving guitar, bass, and keyboards seamlessly into exciting and upbeat grooves. Every instrument is at the same time the group’s rhythm section, as well as the leads. For the most part there is no standout element; everything chugs along steadily with the beat of the song, creeping in and out of harmonies, or doubling another track to create heavier rhythms. This type of composition acts as a great foundation for the New Wave-reminiscent vocals, featuring plenty solid harmonies and catchy melodies. This is not to say there aren’t occasionally some great instrumental melodies as well, but Bridges and Powerlines primarily focuses on creating great grooves; dance potential is key here.

The LP opens with two notably strong tracks, the first being “The Twin,” which gets the dance vibes started right away. Opening with one of the longest vocal-free runs of the album, here the group showcases how well it can layer elements, and reminds us of its affection for electronic music. Multiple synthesizers, a steady electronic drum beat, and a ton of reverb on everyone else, makes for an up-beat and dreamy welcome. Following, we have the title track, and first single of the album, “National Fantasy.” A simpler arrangement, focused on a clean guitar track, and vocal harmonies from start to finish. This track is moodier than the opener, but the contrast is very suitable and it makes for a pleasant addition.

Similar compositions and sensibilities are definitely used throughout the album; however, there are a few tunes that stand out with particularly unique arrangements. One of these standouts is ”Xoxoxo,” which features a more complex drum beat, a grimy low-end synth acting as the bass, and a couple of really interesting guitar parts which play off each other and the synthesizer perfectly.

Bridges and Powerlines has perfected a sound for itself on National Fantasy. It may be similar in many ways to the band’s past work but there’s nothing wrong with a group mastering its craft. National Fantasy is a consistent and meticulously composed collection of Indie-Dance songs, and we’re excited to see where the group takes things next.

Growing up in the dull suburbs of Southern Ontario, Elijah gravitated towards the city at a young age. With a healthy addiction to live music, and a constant itch for discovering his new favourite band, he finds himself happily submerged in Toronto's music scene. With his work appearing thus far in Sock Monkey Sound, and The Spill Magazine, he's going to keep this writing thing going for a while.
RELATED ARTICLES
album reviews
8.0