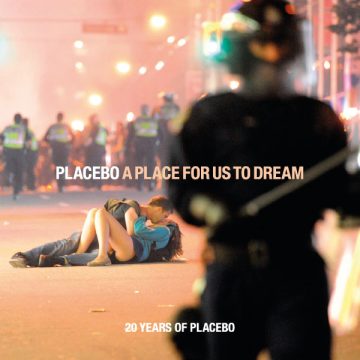 Placebo
A Place For Us To Dream
Elevator Lady Ltd

A Place For Us To Dream is a fresh look back at 20 years of Placebo over 36 songs on two CDs or, if you have money to burn, a four-vinyl box set.

Since this is a retrospective album, I’m going to journey back to the first time I heard Placebo. I remember watching shitty video streams of their music videos on an early-millennium Internet connection. This was around the time of my first foray into Alt-Rock music, listening past the radio-friendly “hits” I knew. I heard the nasal, semi-whiny vocals, distorted guitars and confident imperfection that was Placebo. In confused wonder, I couldn’t make sense of the singer’s androgyny by sight or by sound. The ultimate question that circled my mind as the presentation concluded was a bewildered “you’re allowed to do that?!” It expanded my sense of possibility when it came to music, style and gender. Placebo, with Brian Molko at its helm, became a major source of inspiration to the genderqueer musician I eventually became. So with this in mind, you’ll know a lot what I have to say about this compilation is delivered with a heavy, ashtray heart.

A Place For Us To Dream of course features the classics, the mid-career hits, and some of the newer ones you probably pretend don’t exist. But this collection sets itself apart from a standard “best of” with its alternate versions and re-imaginings of some the band’s earlier songs from its current place in time.

“36 degrees,” now 20 years older, is a much slower song with a rising tension — an interesting contrast to its energetic original. “Soulmates,” the B-side version of “Sleeping With Ghosts,” should probably have stayed on the B-side of history with its amped-up rhythm section, reminiscent of sub-par Nu-Metal track. Some of these alternate versions sound like overproduced mixes that aren’t any better — and are sometimes worse — than the originals. To be fair, a good chunk of the songs are either left undisturbed or are radio edits with minor changes you might recognize better than the album versions. Either way, let’s not talk about track two, the new song on the release.

Overall, if you wanted a true “best of,” you could go listen to the band’s Once More with Feeling from 2004, which really does feature the band’s best work.

Between the novelty of its alternative recordings and its strong foundation in the band’s first decade, this retrospective album creeps up beyond a three. Ultimately though, retrospection is probably the most fitting lens to use when thinking about Placebo, because clearly the best has already passed.

RJ Vandrish (alias Rory Jade Grey) is a writer, artist and musician, having first written for Spill Magazine in 2010. They have also published articles for Daily Xtra and Shameless Magazine, and have written/staged two plays, Electric Sheep and Chimera. RJ’s most recently performed as a solo musical act and with the band I. M. Brown & The Transcendents.
RELATED ARTICLES
a place for us to dreamalbum reviewsplacebo