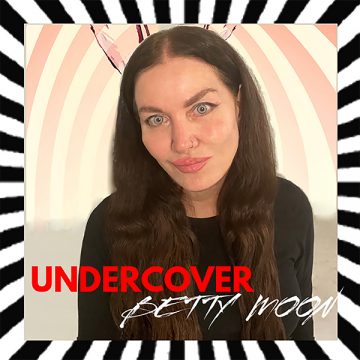 Undercover  may be Betty Moon’s most ambitious yet. She is a talented and brilliant songwriter in her own right, but here she has decided to record a collection of covers. Her interpreting songs should come as no surprise, as she has done so in the past. In fact, a couple of older covers are included  (Jefferson Airplane’s “Somebody To Love” and Depeche Mode’s “No Good”). She covers many artists, from Stevie Nicks to Kate Bush to Bob Dylan to Jefferson Airplane. And in true Betty Moon style, she makes them her own.

The album opens with Moon’s take on Royal Blood’s “Boilermaker”, where she ups the energy and heavy dance beats. Her vocals are strong and it is a great way to open. This is followed by “Running Up That Hill” Moon is very brave to cover Kate Bush, as Bush is held as almost sacred, but she does a good job with it, making it more angry than Bush, which is more of a lament.

What Moon brings to them is energy. She brings power and, in some cases (such as the first single Kate Bush’s “Running Up That Hill”) some heavy and dense production.

Moon has included one original  “Valentine,”  which was written by Betty Moon and longtime collaborator Justin Smolian (who is also a member of Dirty Honey).  However, technically it is a cover, as Moon revisits it, which originally appeared on 2014’s  Amourphous. Here she turns it into a very slow groove that grows and brings the listener in. It is a slow burn song and continues to build and is, quite frankly, the highlight here.

When her covers work, they work extremely well, such as “No Ordinary Love” (Sade), which she turns into a very chill song, or “Busy Earning” (Jungle), where she brings out everything that is great about the song. But other times, her arrangements and cover detract from the original and just do not work, such as her creative attempt at “Like A Rolling Stone”, which is best left in Bob Dylan’s hands.

Overall, a solid attempt and chance for Moon to pay tribute to artists who, no doubt, have been inspirations to her. Undercover allows Moon to slow down and take a breath. From 2019 to 2021 she has released three original albums, and perhaps this collection of covers gives her a chance to recharge. Whatever the reason, Undercover is terrific, full of surprises and twists and turns on songs that are already well known.

Born and raised in Whitby, Aaron discovered music through his love of The Beatles. This led to a career in radio, writing for various publications, and ultimately a radio show about The Beatles (Beatles Universe), which ran for over four years. When not immersed in music, Aaron enjoys spending time with the loves of his life -- his wife Andrea, and daughters Emily and Linda (all of whom have an intense love of music too).
RELATED ARTICLES
album reviewalbum reviewsbetty moon
9.0