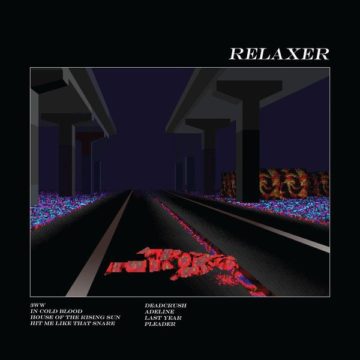 Leeds’ Alt-J reclaims their status as nerdy, literary indie-pop savants on their third full length LP, Relaxer. But before we talk about Relaxer, let’s talk context.

Context is everything. As writers about music, we believe in the altruistic notion of being able to judge an album in a void. Quiet the noise, the expectations, an artist’s past offerings. The album in our ears stands on its own merits.

I praised Alt-J’s debut record An Awesome Wave by calling it a work of “pristine imperfection and unnerving musicality.” Alt-J had created an orchestration, not just a collection of individual tracks. Songs like “Breezeblock” and “Fitzpleasure” survived in the wild, but benefitted from contextual relations. Wave lacked polish and a precise through-line and reflected a quality that may have exceeded the ability of the band. I won’t suggest that Alt-J stumbled in through the back door, merely that the band may not have consciously understood the album’s brilliant pulse. After all, creativity blossoms most often in the absence of purposeful intent.

Perhaps in light of my overzealous lauding of An Awesome Wave, I too harshly judged 2014’s This is All Yours. The overlong album falls short of atomic failure, but the mechanical construction self-consciously attempts to repeat unconscious success. The band misplaced its divine muse. Quantity replaced precision. Tracks stumbled into one another without the same build to catharsis.

An Awesome Wave offered blocks of songs working together to create micro-narratives. The filler felt concise and purposeful and driven by greater notions of classical composition. This is All Yours meanwhile became two sandwiches. “Left Hand Free” on white. “Hunger of the Pine” on sourdough, hold the mayo. Side of fries left in the boil too long.

Context is more than just listener bias and extra-textual information. Album construction is also all about context. Like John Donne said, no song is an island. Maybe I’m misremembering. The point remains. A great rock album consists of a dozen or so segments working together to form greater value. The nature of our piecemeal musical consumption has rendered the notion of a cohesive album in 2017 quaint. Plenty of contemporary alternative bands subscribe to romantic notions of album construction, but few have found the crossover success of Alt-J. A success both helped and hindered by their status as avant-garde popsters.

Relaxer’s opening volley comes in the form of a tribal backbeat lifted from an Ennio Morricone score. Alt-J could have rested on the cinematic nature of this introduction alone, but they use the first two minutes of “3WW” to lay groundwork. The song mutates into an erotically charged, post-coital embrace of abstract imagery between lead singer Joe Newman and Wolf Alice’s Ellie Roswell.

He sings: ‘Well that smell of sex, good like burning wood / The wayward lad lay claim to two thirsty girls from Hornsea / Who left a note when morning came.’

She calls back: “Girls from the pool say ‘Hi’ / The road erodes at five feet a year along England’s east coast line / Was this your first time / Love is just a button we pressed last night by the camp fire.”

This one song, better than any composition on This is All Yours, bleeds into the album’s first single “In Cold Blood,” a poppier confection that fails to stand without its contextual support. On its own, a tossaway single that sounds like what you’d expect from Alt-J, but nothing more. The following outro, a definite non-cover of “House of the Rising Sun,” takes almost 90 seconds to reach volume. Together, the songs boast a three-act structure complete with sex, drama and dénouement.

As they’ve done on all three LPs, this is Alt-J experimenting within a soundscape, placing complementary songs together like a puzzle. If there’s a song that doesn’t quite fit, it’s “Hit Me Like a Snare,” which plays like a cross between the George Harrison’s LSD experimentation and Japanese Go-Go garage pop. As such, the jarring jam-like dirge stands out as a de facto centerpiece.

As Relaxer winds down from that anomaly it regains the lackadaisical momentum and the band re-asserts the view that they’re doing something in service to an ethereal whimsy of wholeness. Even if we more mortals can’t wrap our heads around Alt-J’s focus – the illusion of almost understanding remains, even if it’s always just beyond our fingertips. The incongruities remind us that Alt-J is just a band and that this is just eccentric music, compartmentalized into eight individual tracks serving one master.

Make no mistake; despite embracing downtempo musicality, Alt-J never meant Relaxer for mindless consumption. The lyrics and layered sampling and distortion often come to blows with the face-value palatability. The juxtaposition betrays a sinister subtext.

When “Pleader” swells; strings, organ and a choral performance supporting the refrain “How green was my valley?” (a song based on the Richard Llewelyn book of the same name); the song takes the form of a religious hymn and overwrites some of that deviancy. This hope-filled finale directs our conclusions, just as “3WW” had created expectation and anticipation. These two tracks create the context and we – through our various interpretations – fill in the rest.

James David Patrick has a B.A. in film studies from Emory University, an M.F.A in Creative Writing from the University of Southern Maine, and an honorary Ph.D. in bullshitting about everything else from the College of Two Pints. His fiction and non-fiction has appeared in PANK, Monkeybicycle, Squalorly, Specter Lit, and Bartleby Snopes among other wordy magazines. While he does not like to brag (much), he has interviewed Tom Hanks and is pretty sure you haven't. He bl-gs about music, movies, and nostalgia at thirtyhertzrumble.com and runs the James Bond Social Media Project at thejamesbondsocialmediaproject.com. James lives in Pittsburgh, PA.
RELATED ARTICLES
album reviewsalt-jatlantic records
8.0