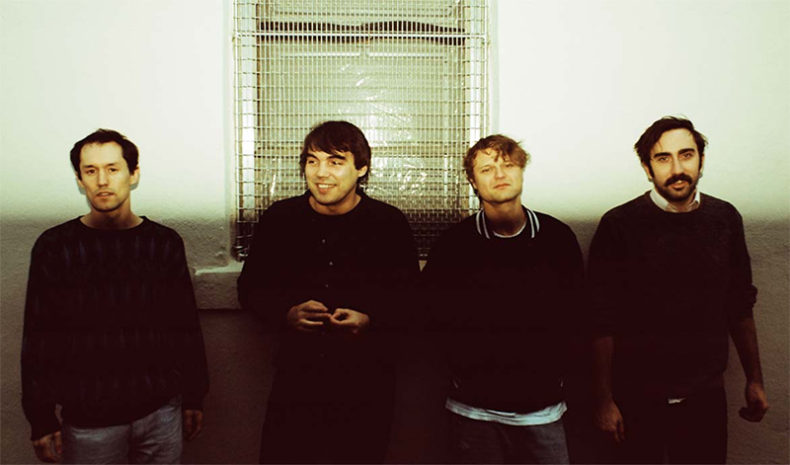 I think that it would be within reason to say that Hollerado is a hard working band. Their extensive tour in support of their recent album, Born Yesterday, has already brought the Ottawa-based foursome to Edmonton twice and there are still many dates yet to be played. While their last appearance in the city was at the illustrious Winspear Centre, this time around they opted for one of the city’s most popular small venues, The Starlite Room. The club setting seemed to suit the energetic band as they interacted with the audience and their fellow musicians throughout the show.

Hollerado can be a bit difficult to place stylistically. Composed of front man Menno Versteeg, guitarist Nixon Boyd, bassist Jake Boyd, and drummer Dean Baxter, they undeniably fit somewhere within the alternative rock spectrum. Aesthetically they display hints of the ’90s to early 2000s grunge, with their ripped jeans and hastily painted guitars. Their moderately do-it-yourself aesthetic extended to their modified guitars and UV reactive blacklight decked stage. Auditorily, they showcase a wide array of influences including classic country, rock, and a dash of folk.

Within their hour and a bit long set, they also included two songs by other artists. To welcome the band to the stage, Hank Williams’ “I Saw The Light” streamed throughout the hall. Later, near the end of their main set, Kanye West’s “All Of the Lights” was inserted into the middle of one of their extended jams that connected songs together. These two songs are incredibly different yet both seemed to appropriately suit their position within the performance.

Across their setlist, Hollerado played many of their popular songs including the title track from Born Yesterday and some deep cuts off of their previous albums.

Throughout the entire evening was a sense of friendship and camaraderie. Many musicians from multiple bands including the opening acts Everett Bird, who celebrated his birthday at the show, and Little Junior, who seemed to channel the’ 90s punk ethos, played together throughout the evening before culminating in one final hurrah with everyone on stage. This friendly attitude extended to the polite and extremely appreciative audience that gathered on a busy Saturday night.

In the final hours of the evening, after all, sets had finished, members of all the night’s bands gathered to greet fans and reminisce past shows. Hollerado’s quick and welcome return to Edmonton seemed to be a well-appreciated success.

I am an Edmonton based musicophile and photographer who loves experiencing music whether it's live or on my turntable. I play seven instruments and go to a lot of concerts.
RELATED ARTICLES
born yesterdayedmontonhollerado

by Br. on March 2, 2018
Margaret Glaspy Born Yesterday ATO Records Inevitably, one of the most commonly accessible methods for reviewing an artist is by comparing them to another artist to whom they sound [...]

SPILL #CONTEST – WIN A PAIR OF TICKETS TO SEE HOLLERADO ON OCTOBER 19!

SPILL #CONTEST – WIN A COPY OF THE NEW BOOK ‘THE LEGENDARY HORSESHOE TAVERN: A COMPLETE HISTORY’ + A PAIR OF TICKETS TO SEE HOLLERADO ON OCTOBER 19!

by SPILL NEWS on September 18, 2017
CONTEST CLOSED   ENTER FOR YOUR CHANCE TO WIN A COPY OF THE NEW BOOK THE LEGENDARY HORSESHOE TAVERN: A COMPLETE HISTORY + [...]