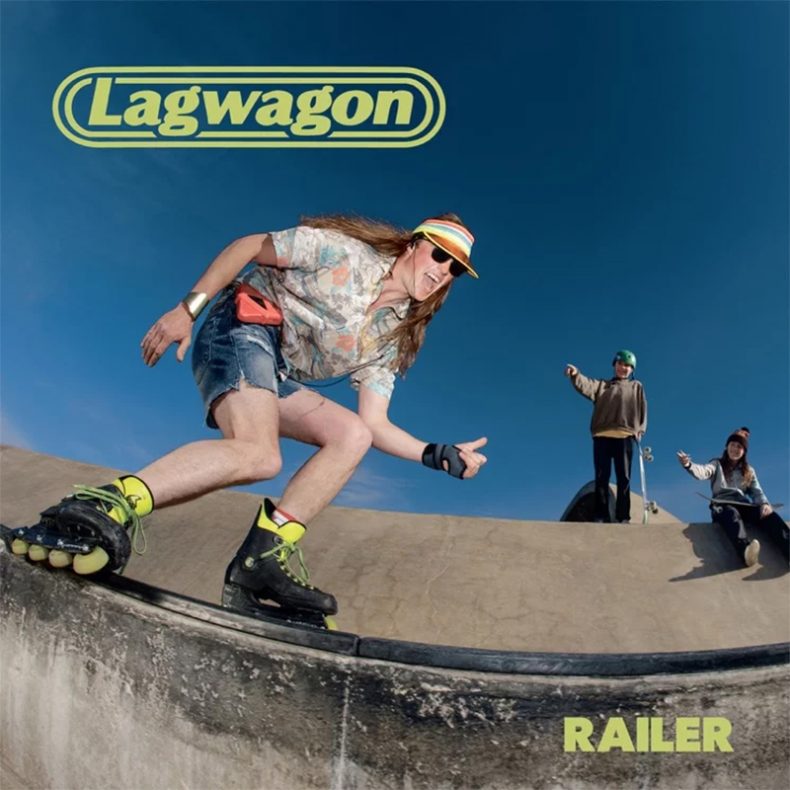 It was on “Falling Apart,” off Lagwagon’s 2005 full-length Blaze, that frontman Joey Cape first committed the word ‘railer’ to tape, but in fact it’s a term that the California band has been using for a long time amongst themselves.  Now it’s become the title of the influential punk five-piece’s ninth album, due out October 4, 2019 on Fat Wreck Chords.  As Cape explains, ‘railer’ is “a funny word from childhood that means ‘silly bad’, like lame” and it captures the sense of throwback that flows throughout its 12 songs. That idea of looking to the past was inspired after Cape came up with “Bubble,” the first song he wrote for the album, and he then just took that idea and ran with it.

“The idea of that song was to embrace and appreciate what you have,” explains Cape, “and I really specifically tried to make it feel and sound like an old Lagwagon song, so I borrowed a lot from early records for it. And then from there, I just kept thinking that the rules have to be that Railer feels like something Lagwagon might have done in the old days. I wanted to see what would happen if I didn’t overthink things and I just tried to write a record as quickly as possible without losing the quality I expect from myself as a songwriter.”

Unlike the last few Lagwagon albums, Railer was written in an incredibly condensed period of time, in an attempt to capture the spirit of the band’s early days.  And it worked. While songs like “Stealing Light,” “Dangerous Animal” and “Dark Matter” bristle with a raw, ragged and pure energy that’s unusual for any band to have after almost 30 years of existence, these tracks also directly harken back to the band’s early days.

“There’s only so much one person or a group of people can do before they start to develop characteristics that become common to them,” says Cape in typically philosophical fashion, “and I think you have to be comfortable with that. And I am. I like my band and what we’ve done and I’m okay with the fact that we have our strengths and we have our limitations. I know what it is that we do well and if we stay true to that, there’s something that comes out of that that is truly original, because you’re being true to who you really are.”

At the same time, Railer (produced by Cameron Webb at Maple Sound Studios in Santa Ana, CA) accurately and honestly reflects who Lagwagon are in 2019, both lyrically and musically. Perhaps the best example is “The Suffering.” Inspired by the writings of Bertrand Russell, who has become a big influence for Cape in recent years, the song starts with a graceful yet ominous piano passage over which Cape’s friend Jason Simpson reads a passage by the philosopher, before transforming into a dark and surging song about the nature of human existence. While it sounds like it could have been written by a band 20 years younger, “The Suffering” also offers a glimpse into Cape’s mindset as a 52-year-old. That dichotomy exists on all of Railer‘s songs – youthful but jaded, frantic but exhausted, visceral yet cerebral. “Surviving California,” for example, was inspired by the city where Cape now lives, and serves as both a personal and political treatise on the socio-economic state of America today.

“I live in San Francisco,” Cape says, “which is arguably one of the most expensive places in the world to live, and it’s very difficult to make ends meet for a guy on a band salary – on the inconsistent wage I make from what I do – and like everybody else, I struggle. I’m not feeling sorry for myself, but these are the things you deal with in your day-to-day life when you’re my age and you have a family to support…you write about whatever it is that’s on your plate.”

Indeed, that idea of struggle – alongside an overwhelming sense of existential chaos and angst – is a common thread throughout RAILER, in the bouncy desperation of “Jini”, the aforementioned “The Suffering”, the breakneck despair of “Parable” and even in the carefree nostalgia of “Bubble” and its unflinching celebration of the band’s early days of “beer for pay” and the “roach-ridden pads” they used to crash at. Life has moved on in the three decades since Lagwagon started, but it’s not something the band – guitarists Chris Rest and Chris Flippin, drummer Dave Raun and bassist Joe Raposo (who wrote “Surviving California” and “Dangerous Animal” with Cape) have entirely left behind either.

What is definitely different from the earlier days that this album emulates so perfectly, however, is the depth of meaning packed into these short, blistering songs. The best example of this is “Pray For Them,” a rallying cry that takes aim at the increasing number of people in this day and age who turn to ‘thoughts and prayers’ to address the world’s problems rather than taking action to try to actually solve them and help others.

“I think a lot of people feel powerless,” says Cape, “and in some ways, rightfully so when it comes the suffering in the world.  But there are a lot of people on this planet who think prayer absolves them of any responsibility to further help other people who are suffering. Like with war-torn nations that are having bombs dropped on civilians, or with refugees drowning in bodies of water in-between countries they’re fleeing from, a lot of time the  common response seems to be ‘We’ll pray for those people’ and I just think that’s awful.  Praying doesn’t absolve you of your responsibility to at least try to look at the issue more deeply and consider the things you can actually do in your life to alleviate those conditions. Praying isn’t enough for a family in a boat that’s going to sink.”

Cape doesn’t necessarily expect people to extract his specific philosophies from each of these songs, but they’re certainly present for the listener to seek out if they want to.  At the same time, just as with Lagwagon’s earliest songs, Railer‘s songs are there to be listened to and enjoyed, to take you back to simpler times. It’s no coincidence, then, that Railer ends with a frantic punk rock cover of Journey’s “Faithfully”. Back in their earlier days, Lagwagon’s albums often used to include cover songs, but the band hasn’t recorded one for a long time, until now. And, with this record, Lagwagon have come full-circle and rediscovered the purest version of who they’ve always been as a band. Not that that feeling was ever really lost in the first place, of course.

“I wouldn’t say ‘lost’,” confirms Cape, “but you evolve. Evolution is a journey within yourself.  You go on this journey and it takes you wherever it takes you, there are multiple people along the way that you meet who have different ideas than you and as you grow, you get into different things along the way.  I don’t know if you ever completely lose the sense of where you came from, but you definitely evolve away from it over time. But the thing is, it’s always there.”

SPILL NEWS strives to keep our readers up to date with news and events in the music industry. We keep you informed of the most recent information regarding new releases, tour dates, and information items about your favourite artists.
RELATED ARTICLES
fat wreck chordsnews
10

by Jake Collier on February 26, 2021
NOFX Single Album Fat Wreck Chords NOFX is still around 40 years since their early beginnings, and what is there left to do when the rest of their era’s punk bands have fallen or sold out? Well, [...]

by Contributing Writer on March 13, 2020
The Bombpops Death In Venice Beach Fat Wreck Chords This is a band who absolutely have found their moment. Check out the promotional poster  for “Zero Remorse” and you will see [...]
9.0

by Michelle Cooney on March 6, 2020
Pears Pears Fat Wreck Chords New Orleans hardcore punks PEARS have released their third full-length.  Established in 2014, the four-piece is known for its singular blend of hardcore punk that crosses [...]
6.0