SPILL ALBUM REVIEW: ACID DAD – TAKE IT FROM THE DEAD 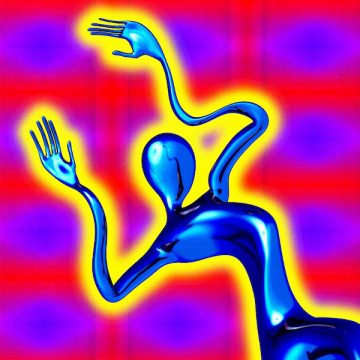 Following their 2018 self-titled debut, Acid Dad has returned with newly released LP Take It From the Dead, co-released by Greenway Records and The Reverberation Appreciation Society. A collection of eight like-minded tracks, the album is built around edgy, guitar-driven psychedelic surf rock with streaks of punk and nineties alt-rock mixed in for good measure.

Opening track and early single “Searchin’” has perhaps the slowest tempo of any song here, and gets close to something like a Mac Demarco Salad Days sound, but it effectively sets the tone and intention of the album from the start with lyrics like, “Holographic nightmare in the desert of glass stairs,” before winding around to the chorus:

“I’m lost, haven’t found/
I’m still searching for the sound/
There’s a chain wrapped on me/
I’m still stuck in the seventies.”

Having listened through a few times, it’s interesting to think of those last lyrics as a confession of sorts from a band perhaps weighed down too heavily by their influences. Indeed, after “Searchin’”, the album does feel stuck in a similar gear the rest of the way through. The hazy vocals, the long, flowing rips of guitar between, and lyrics that waver between everyday things like “Let’s go down to the 7/11 and get a sandwich” as in “Good Time” to the far-out imagery of lines like “I don’t mind when you steal my spine/Muscle growth in a garden that served us both/But I won’t lie, I can’t trust myself” from long closing track “Djembe.” By the end, a familiar structure emerges, each track somewhat indistinguishable from the previous with some brief exceptions like the ominous instrumental section in the second half of “Smile You’re On Camera.” If this album is hypnotic, which it definitely can be, it would come from that overlap in sound aesthetics.

Overall, this is a fun, fast album of hazy, sun-baked songs perfect for any warm outdoor activity like skateboarding in empty pools or BBQing with your coolest friends. Of course, should you choose to make those or other situations more “psychedelic” somehow, that would be totally in line with the spirit of Acid Dad’s latest effort here.

SPILL ALBUM REVIEW: ACID DAD – TAKE IT FROM THE DEAD

Dan Kennard is an English teacher and fiction writer living outside Kansas City, Kansas where he lives with his wife and children. More about his work can be found at amazon.com/author/dankennard. You can also follow him on Twitter and Instagram @kennardistry or contact him at kennardistry@gmail.com.
RELATED ARTICLES
acid dadalbum reviewalbum reviews
7.0