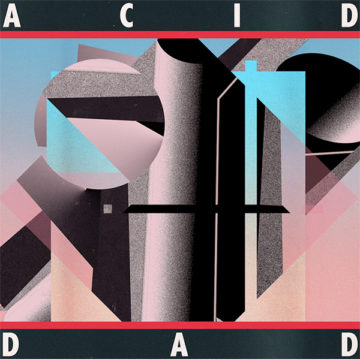 New York City’s Acid Dad have returned with their first ever full length, self-titled album.  Acid Dad follows the alternative rock outfit’s 2016 debut EP, Lets Plan A Robbery, and gives fans a long awaited release that continues deeper down an alternative, vintage, and slightly quirky path in which they ventured since their inception.

Opening with the ambient sounds of “Die Hard”, the song grows from an electronic groove under a droning synthesizer with muted vocals over top to a rhythmic and crunching rocker reminiscent of The Strokes. It’s rough, raw, and exciting. The record continues to blend such a contrast of mild modern punk – in tone of The Clash with elements of Pearl Jam and REM – along with softer and more atmospheric elements. Songs like “Mr. Major” and “Child” are both heavy soundscapes which feel hazy with the sense of a thick fog over the band’s alternative punk sound.

While there are a number of tracks that embrace a more straight ahead rock feel, Acid Dad is at its best when the songs combine the often contrasting nature of these styles to create a sound that is highly unique to themselves. Songs like “Marine” and “Ci” and hazy rockers with a sense of drive to them while “Mistress” is as explosive, dissonant, and experimental as the band gets.  While songs like the final two tracks “No Answer” and “Dissin’” embody such a fusion, the one thing that stops Acid Dad from being a truly incredible record is the lack of versatility. Many of the songs share a similar pace, style, and tone, that it takes away from the excitement of a full length record. That being said, the experimental nature of Acid Dad’s sound is one that, with enough momentum, can play a greater influence for both modern alternative and indie rock.

Acid Dad is a unique collection of 11 tracks.  While the band has a certain disregard to what is popular or expected, their debut full length album takes a strong rock element and dresses it in an ambient and slow haze that, at times, shares a commonality with popular indie bands of the day. In this sense, Acid Dad is a highly unique record, and while it may lack a strong sense of dynamics, the album is one that feels truly original and makes for a strong debut that will leave fans excited for what has yet to come.

A passion for music has always been a part of Gerrod’s life. As a young boy, he was raised on a steady diet of the music from The Chili Peppers, Aerosmith, The Stones, Prince, and others from his mum. Raised in the GTA, Gerrod continued to foster his love for music by attending a wide range of concerts and learning the drums. His unapologetic passion for music has no bounds and has spread to a wide variety of styles, whether it be the 90’s rock that sound tracked his teenage years, the jazz he studied in university, or his newfound love for hip-hop. He recently received his bachelors in music and education from York University and is passionate about writing and reviewing good (and less than good) music. Gerrod is also the drummer and songwriter for a Toronto based rock & roll band, One In The Chamber.
RELATED ARTICLES
album reviewsgreenway records
8.0