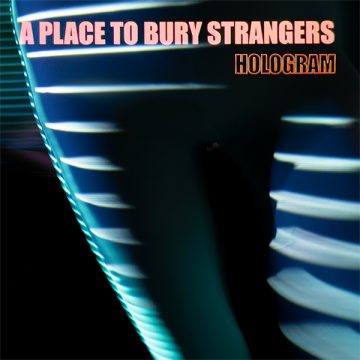 If you haven’t heard A Place to Bury Strangers (APTBS) since their arrival, making records about exploding heads and shows loud enough to do the same, not too much has changed. For fans of the brutal, psychedelic, shoegazey band from Brooklyn, this is good news. Due to their longevity, however, APTBS will be harshly criticized for every new release that is not a radical departure. As there’s nothing else to complain about, this will be the case with the Hologram EP.

However, the opener, “End of the Night”, is a departure. Triumphant, danceable, harmonizing: these are not words associated with APTBS. Making a concerted effort not to sound bummed out, vocalist/guitarist Oliver Ackermann does his best Jim Reid to drown out a blaring guitar riff. Somehow, he sounds hopeful: “Now that the night is gone/Falling to pieces.” If you’re going to fall to pieces, this is the way to do it.

For a song that doesn’t give away one shred of a lyric for context, “I Might Have” is very catchy. Putting the punk into post-punk, it’s an exhilarating come-up after “Night,” ending on a hookey bass solo before sliding seamlessly into “Playing the Part.” This brief, Cure circa Three Imaginary Boys ditty is squeezed into a tightly composed musical space and is a rare occurrence of hearing APTBS dry and unadorned, as if Rick Rubin was producing.

“I Need You” is APTBS’s “With or Without You”, mournful, plaintive regret. What the two songs share in common is the negative space containing bassline leads rather than overt melodic elements. Hologram’s dramatic centerpiece, “In My Hive,” begins with some Radiohead raindrops that open into a wider space with strangled guitar neck figures and solar flares. The tension keeps ratcheting up until it culminates into a full-blown planetary event: the sound of tectonic plates pushing up the ocean floor, collapsing into itself, and cooling again.  These shifts in the ‘space’ each song occupies are what make Hologram so memorable even before the songs themselves invariably will.

Charles T. Stokes is a nonprofit resource development coordinator and donor researcher based in Denver, USA. He’s also a tennis player and writer looking to make a racket with his own noises. “There are places in the world where one cannot publicly listen to or perform whatever music they choose without fear of harassment or prosecution. The freedom to write about new music is power, a privilege.”
RELATED ARTICLES
a place to bury strangersalbum reviewalbum reviews

by Charles T. Stokes on February 4, 2022
A PLACE TO BURY STRANGERS SEE THROUGH YOU DEDSTRANGE See Through You is fully stocked with post-punk basslines, jagged rhythm tracks, squalling guitars, disembodied [...]

by SPILL NEWS on February 8, 2017
A PLACE TO BURY STRANGERS ANNOUNCES TOUR WITH THE BLACK ANGELS Brooklyn’s noisy, atmospheric A Place To Bury Strangers has announced a slew of tour dates supporting [...]