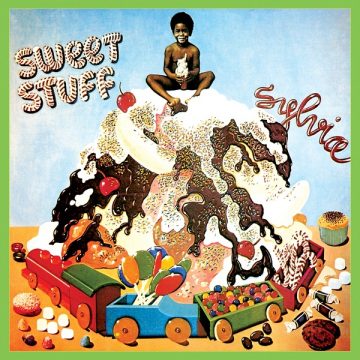 The legacy of Sylvia Robinson is that as a hip-hop pioneer, she was the woman who pushed The Sugar Hill Gang into the studio to record “Rapper’s Delight”, the first ever recorded hip-hop track and mega hit – and later Grandmaster Flash & The Furious Five’s “The Message” – which essentially brought the genre off the streets and parties of New York City, and distributed it as a world-wide phenomenon. It comes as a surprise to many that Robinson actually was a soul singer herself. Having passed in 2011, her sophomore album, Sweet Stuff, originally released in 1975, has been reissued, featuring one bonus song and an extended track.

In true ‘70s soul fashion, Sweet Stuff opens with a grand instrumental section, full of accenting woodwinds and strings, that welcome the sweet vocals of Robinson on “I Can’t Help It”. This is likely the strongest song on the album with a structure that feels well-developed. Furthermore, here are Robinson’s vocals at their best. That being said, there are moments where you expect her to belt, to add a layer of intensity through dynamics, however this just never arrives. The same could also be said about the following track, “Coward’s Way Out”.

Throughout the course of its 11 songs, Sweet Stuff never quite finds its momentum. Songs like “The Notion”, “Private Performance”, and “Alfredo” feel more uncomfortable rather than sexually charged as Robinson attempts to deliver a sultry vocal delivery. Musically, the album never seems to find its way between funk, disco, and soul which only hinders the album further. The extended cut of the soft ballad, “Soul Je T’Aime” only continues this trend, but in a bilingual manner. At the very least, the previously unreleased “Sho Nuff Boogie Part 2” is a step in the right direction with a funky strut that builds off the motifs of the first “Sho Nuff Boogie” on the album.

Some albums, unfortunately, aren’t worth reissuing. Sweet Stuff simply has not stood strong to the test of time nor do the bonus and extended tracks add enough that such a revisit feels necessary. Without a strong enough voice and instrumental arrangements underneath Robinson, the sensual tone of the record falls flat, feeling forced like an uncomfortable soundtrack to a B-list movie from the ‘70s. Despite this harsh criticism, we should remember Robinson as an essential figure who pushed hip-hop to the masses that ultimately shifted the tone of popular music for decades to come, so much so that we are still feeling the effects of “Rapper’s Delight” and “The Message”.

A passion for music has always been a part of Gerrod’s life. As a young boy, he was raised on a steady diet of the music from The Chili Peppers, Aerosmith, The Stones, Prince, and others from his mum. Raised in the GTA, Gerrod continued to foster his love for music by attending a wide range of concerts and learning the drums. His unapologetic passion for music has no bounds and has spread to a wide variety of styles, whether it be the 90’s rock that sound tracked his teenage years, the jazz he studied in university, or his newfound love for hip-hop. He recently received his bachelors in music and education from York University and is passionate about writing and reviewing good (and less than good) music. Gerrod is also the drummer and songwriter for a Toronto based rock & roll band, One In The Chamber.
RELATED ARTICLES
album reviewalbum reviewswewantsounds
9.0