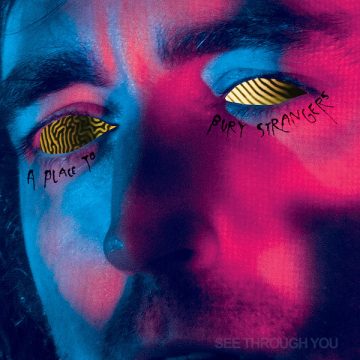 A PLACE TO BURY STRANGERS
SEE THROUGH YOU
DEDSTRANGE

See Through You is fully stocked with post-punk basslines, jagged rhythm tracks, squalling guitars, disembodied vocals, and nonsensical lyrics, then dressed in a thick sludge of dissonant guitar gruel that are all trademarks of A Place to Bury Strangers (APTBS). What it lacks is the variation that made last year’s Hologram EP excellent.

The band makes a good effort to have a little fun with their take on T. Rex in the gruff glam of first single “Let’s See Each Other.” “Your stories make me laugh, let’s take some photographs, every touch sends another shudder.” It’s as much fun as a Zoom meeting with a bunch of album critics. Every APTBS record has one, and the featured head injury song this time around is “My Head Is Bleeding,” which might explain why Oliver Ackermann forgot to write a vocal melody. Its surf rock repetition is driven by good use of what sounds like a preset patch from a Yamaha DX7 around 1986.

“Broken” is a fascinating study in production showing what APTBS can do with easy power and a little restraint (no, not that kind). A tinny rhythm track and bass lead gradually expose the negative space and gaps in the mix, like sitting on the bed of an 18-wheeler and watching the highway rapidly zipping underneath. Another unsettling moment comes in the pre-chorus for “I Disappear (When You’re Near)” when the low end falls out the bottom of the mix. The penultimate track, “I Don’t Know How You Do It,” is another surprise. The addition of a female lead vocal isn’t new, but we’ve never heard such overtly New Wave textures from the band.

This optimistic turn segues nicely into the final track, “Love Reaches Out,” an expert facsimile of a Joy Division or New Order song circa 1982. To simply dismiss it as a blatant rip-off of “Ceremony” would be lazy, however, considering APTBS has never made an effort to distill its influences. Skittering, propulsive snares, a slide guitar’s shimmering delay, almost-personal lyrics, and an Ackermann vocal performance—with the same nuance and tenderness that gave Bernard Sumner’s wan, detached voice warmth and character—combine to make “Love Reaches Out” unforgettable. It sounds nothing like APTBS (until now) but is easily the album’s best song. For a band that could use a new trick, it’s a welcome aberration and hopefully a harbinger of future transgressions

Charles T. Stokes is a nonprofit resource development coordinator and donor researcher based in Denver, USA. He’s also a tennis player and writer looking to make a racket with his own noises. “There are places in the world where one cannot publicly listen to or perform whatever music they choose without fear of harassment or prosecution. The freedom to write about new music is power, a privilege.”
RELATED ARTICLES
a place to bury strangersalbum reviewalbum reviews

by Charles T. Stokes on July 16, 2021
A Place To Bury Strangers Hologram Dedstrange If you haven’t heard A Place to Bury Strangers (APTBS) since their arrival, making records about exploding heads and shows loud [...]